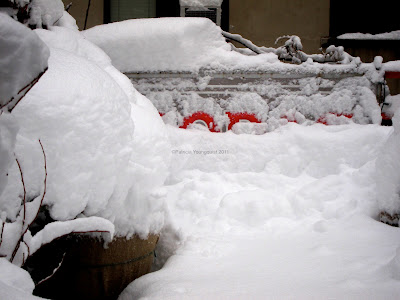 The snow fell so hard last night that it actually woke me from a deep sleep, and when I looked out unto my terrace where I have my urban terrace garden and saw that, my SODA sign, which is at the north end of my terrace was almost covered, leaving only the top of the letters "O" and "D" ---nearly giving the impression of winking.

All my plants, herbs, and shrubs were completely buried except for a few brave branches from my Contius Coggygria  or Smokey Bush (which you can see in the extreme left hand corner of the photograph posted above) peering out of the burlap-wrapped container which "houses" my Smokey Bush, and that is tied with turquoise jute. This amazing shrub has served as an inspiration on many occasions, including "posing" for a photograph which was later rendered into a note-card which I have written about in an early blog entry.  I've called this card Grace (Smokey Bush) because this shrub is fondly referred to as "Grace" or "Royal Purple" by growers.

The card is part of my single-sided petite card collection. This particular rendition shows this shrub's beautiful burgundy leaves trimmed  — ever so discreetly —in a magnificent pink. Perhaps that's where the shrub's "common" name of Grace (and "Royal Purple') originated. Grace's leaves do turn from their March-April-May-June burgundy (or "Royal  Purple") color... 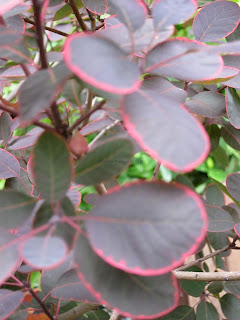 ...to a July-August green (maintaining its discreet pink leaf trim)... 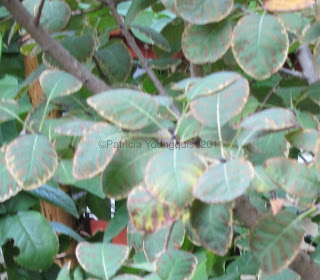 ...before giving way to brilliant orange and yellow  hues in late Autumn... 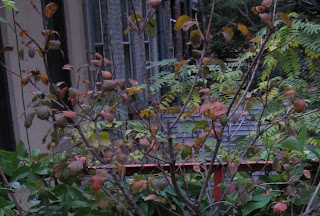 ...when its leaves fall off leaving behind exquisitely textured branches that are now "popping" out of the snow. 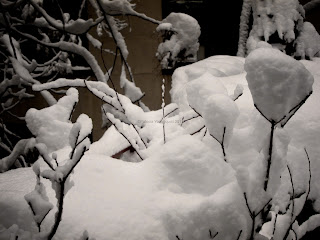 It is the changing color of the leaves that never fails to fill me with comfort by reminding me, in my darkest hours, that all things are passing, but it is their branches that provide me with awe (as they did Joyce Kilmer when he wrote the poem Trees and made mention that they "lift their arms to pray"), and amusement. Although my Continus Coggygria, is not a tree, and is a  shrub, its amazing textured branches not only lifts their arms to pray, but it uses them to create cups for snow, which I call nature's snow cones, named lovingly after the treat —a treat that delights and unites the world.

A snow cone is a paper cup filled with crushed ice topped with flavored syrup, and stand apart from "ices" because they are flavored after they are produced, whereas ices are flavored while the treat is being made. The reason I say that the snow cone unites the world is that, in spite of all of the tensions over cultural differences, snow cones are loved by all.

The list of snow cone flavors varies depending on the culture. Snow cones can be made with cinnamon and milk, or lemon and chili powder, or fruits and chili sauce, or even with cucumber. Some folks flavor them with a currant liquor, making a  Kir snow cone or even with Frangelica, the hazelnut flavored liquor.

Whatever they are flavored with,  and whatever they are called, snow cones represent joy, which may be why my SODA sign appears to be winking at my Continus Coggygria's snow filled branches which are so deligtful, I've rendered another image of them — in black and white as seen below. 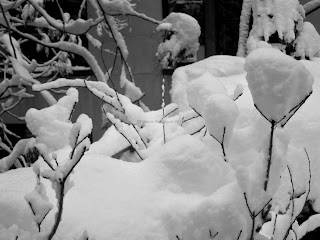