" . . . Should old acquaintance be forgot and never brought to mind?" (Hmmmmmmmmm, that depends.)

Should old acquaintance be forgot and never brought to mind? Many people probably asked this question in the singing of the Auld Lang Syne song as they rang in the New Year a few days ago.

I recall walking up Central Park West sobbing over a broken heart from an unhealthy relationship with a man, when I was confronted by a woman walking her dogs, who cried out to me, "I hope that's not over a man!"

Thankfully, my heart mended, and I could walk up the avenue without sobbing; and one time while doing so, happened upon the same woman walking dogs— only this time she was the one in tears, over a break-up with a man. In these cases of painful relationships, old acquaintances need to be forgotten; but for the most part old acquaintances are to be cherished, and this is often made known during a holiday season – whatever holiday you observe — by sending cards.

For me, this is Christmas time, and every year I attend a party thrown by a neighborhood friend, and I am always moved by her display of cards, as seen in the photograph at the top of this post. In the case of my friend, she does not just put up cards that are from the current season; she includes cards that are her favorites from years ago. I am happy to say one of my petite-fold out cards is included in her mix. As for the displaying of holiday cards that I receive, like my friend, I put them up in a prominent  place in my small studio apartment, usually around the alcove that connects my main living area with my kitchenette as seen below: 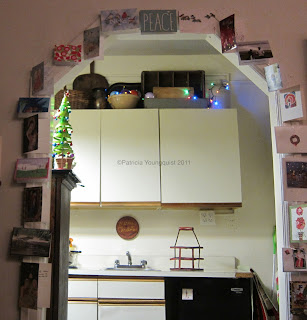 Here's a portion (to view the entry in its entirety click here) of what I wrote: "I'm encouraged to learn that others might feel strong about the sending  this way too. Nine days ago  (March 13th 2010), on National Public Radio's W.N.Y.C, one of The Leonard Lopate Show's featured guests was Thomas Mallon, the novelist and critic, who was touting his book, Yours Ever, People and Their Letters, published by Pantheon. As Daniel Okrent states in a  November '09 review of the  book: 'Mallon's writing about a practice that for at least eight centuries was the primary means of communication between people who happened not to be in the same place at the same time. It was more than just communication, though; it was a form of human conduct enhanced, even exalted, by the demands it imposed on those who practiced it. (Mallon) writes, The small hardships of letter writing -- having to think a moment longer before completing utterance; remaining in suspense while awaiting reply; having one's urgent letters cross in the mail -- are the things that enrich it, emotionally and rhetorically,' Okert concludes that, 'Given the present and future of letter writing, it's a privilege to be cherished.' "Hearing the interview with Thomas Mallon, and re-reading Daniel Okrent's review, leads me to believe that not only is letter writing, a privilege to be cherished, but so is the sending and the receiving of paper cards. The impact (on quality communication) of mass-produced-E-cards getting lost in cyber-space, spam, or with a broken link, is threatening whatever little personal touches have been left in communicating these days -  and is fueling impatience, as well as the need for immediate gratification."


Today I have returned to Thomas Mallon's book because I received it for a Christmas gift and have found it an enjoyable read. Since today's post concerns the displaying of cards received, my thoughts turn to how does one display an array of "E" cards received assuming the links to them have not already broken?


In his book, Mallon has this to say about computer correspondence:"For all the wild calamities of indiscretion that cyber communication has excited, in and of itself it is far less sexy than a gartered clutch of letters that were once sealed with a kiss and had the words 'I Love You' secretly written under the stamps." Mallon concedes as do I, that "electronic mail has its endearing traits." How could I not take that position when I am a blogger and created an animated ad to promote it in cyberspace — which, if you haven't seen but would like to, can be found in my New Year's Eve post by clicking here.


Cyper communication and 'snail-mail' do not have to be mutually exclusive. As Mallon points out, "If you have bought or borrowed this book, I am guessing you're the type of person who deplores the absence of salutations and polite closings in electronic correspondence. And yet, I'll bet that, like me, at some point in the last couple of years, on your own digital road to Damascus, you are thunderstruck by the realization that you've sent a text message that read in its entirety: 'r u there?' We are all living in Mr. Jobs world now. Its addictive instant gratifications have replaced the old, slow, anticipation of the daily visit from the mailman, who now brings mostly junk and whose bosses at the United States Post Service, have for the past dozen or so years, been pleading with customers to come back. One advertisement from 1996 read: 'In this electronic age, a letter is personal and permanent. It says you took the time and trouble to communicate. The impact of a letter is unique, whether you are complaining about a disappointing purchase or declaring your love. The point is, write. A letter or a card is truly a unique gift —a piece of yourself.'"


Mallon is 'preaching to the choir' when it comes to my beliefs on correspondence, but I differ with him on what he calls "Mr. Job's world," for of course he is referring to Steve Jobs, the man behind Apple, one of my favorite products.

I don't believe that Mr. Job's world excludes itself from the personal touch — at least his Apple employees at Sixty-Seventh Street and Broadway, where I have given a presentation, don't.

Case in point: During the recent snowstorm that nearly paralyzed New York City, causing banks and post offices to not open (a disaster I wrote about in a previous post), I had an early morning personal project session scheduled but received a phone call from, an Apple trainer early that morning advising me that, due to the weather, my personal project session would need to be postponed. "Was I free later in the day to reschedule?," he asked and then offered to make the appointment for me.


This was impressive to me because I have an 'electronic' relationship with Apple and they could have easily sent out mass emails telling students like myself of their need to change my session. Or done nothing, like Citi Bank. But Apple had Juan Urbine, (the Apple trainer scheduled to run the session that day), take the time to phone me, and to assist in the rescheduling — if this is  "Mr. Job's world" I am grateful to be a part of it,  as I am so blessed with what Apple trainers have taught me. I have made acquaintances there that shall not be forgot and always brought to my mind!