In Loving Memory of Aunt Grace Fitchie . . . (And One Reason I Like the Paper Card) 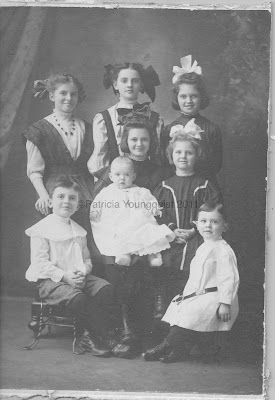 My blog, as you may know, is only a little over a year old and has only recently celebrated its anniversary. Today, like an occasional WNYC (NPR) program of The Brian Lehrer Show,  Prairie Home Companion, Car Talk and even Wait, Wait Don't Tell Me, in which repeats of favorite shows are aired again, I am repeating part of an entry from February 2010. This is in honor of Grace Fitchie, my dear great aunt pictured in the photograph posted above, standing in the middle of the last row next to my grandmother, Clara May, who is at Grace's left hand side.

Grace was born on this day, January the third, in the early 1900's, I blogged about her in February 2010. She was an influence on my knowing the value of sending cards, and one that she sent me, over forty years ago, is still an impetus for me to continue to persevere in the new year with my designs of cards that are about more than communication, invitations that preserve moments in time, and event program covers that enhance an occasion, in keeping with the mission I have laid out in my philosophy which I have mentioned in numerous occasions within this blog.

Moreover, a birthday card — that I received as a young child —from my dear Aunt Grace has kept her alive for me, although I am certain her memory would still be with me — even without having the card to look at. Still, the card, now framed and sitting near my desk, is a beautiful reminder of her, and especially today, the day of her birth. The card she sent also inspires me to maintain the high standards I have for my other art work, as evidenced on my web-site  where, in addition to these items, original art prints that I have created can be found, as well as purchasing information for all my work, and this, as well as Grace's influence, is what friends and colleagues were celebrating last February and I described it this way:

"Engaging conversations. Sipping Papillon Hermitage. Snacking on Prince De Clavrolle Cheese and a baguette from Tom Cat Bakery as we make up our own words to the "Let it snow, Let it Snow, Let it Snow"  song and replace them with "Let it Go, Let it Go, Let it Go." We are snow-bound in my studio apartment and looking out onto my terrace garden celebrating my winter note-card collection and so this is my first 'in-between-Saturdays-post.' These cards are on the web-site, and are so perfect for the season and to send when 'E' cards just won't do. We are not 'E' card people, and while we are fairly proficient in using the computer, and are very much concerned about our environment (we don't "waste" paper), we like to keep in touch in a personal way which is often by mailing a card. This causes me to think how grateful I am for some of the 'paper-cards' — as they are now branded — that I have gotten in the past. While I am not a collector, I have kept some very special paper cards that I have received. I've even framed some cards.One card that I have framed is from the summer after sixth grade. It is one that I received from my Great-Aunt Grace (who had eyes like Bette Davis eyes — long before the pop tune coined the phrase — but not the personality Kim Carnes  depicted in that song), my maternal grandmother's sister, who I always remembered as having been to the World's Fair (as seen below) in New York City, which even as a child, is a place where I wanted to live." 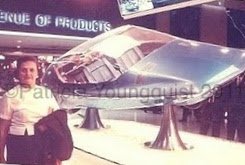 "That summer had been hard. I was very overwhelmed: My father had moved away the year prior, my Neurofibromatosis was now causing bumps to appear everywhere on my body. I wanted contact lenses, because my left eye was frequently turning inward from the lack of acuity  that it had, and my eye-doctor had told my parents that contacts would help with this problem as well as help to correct my low vision. Additionally, I would be attending a new school in the fall —the junior high school — where I would be going from room to room for various classes as opposed to having everything taught in one room, and I  was nervous I would not have time between classes to arrive on time. I even thought of my possibly missing the elementary school kids despite the fact that they didn't pick me to be on their Murder Ball team because of my low depth perception causing me to be an "easy-out." At least they had seen my physical problems and the teasing me about them had subsided; now I'd have to start all over again by being with different kids." 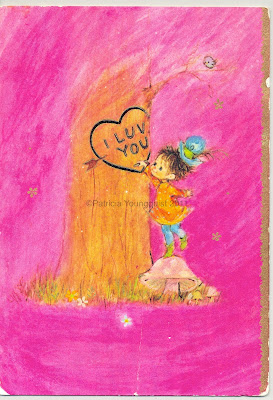 "Most of all, I was overwhelmed because I could not comfort my mother, who cried constantly over my father's leaving us. I knew I could share these thoughts with my Great-Aunt Grace, who often 'baby-sat' when my mother needed someone to take care of me. I was looking forward to seeing Grace on my birthday, but that was not to be. My dear great-aunt died unexpectedly in her sleep. She had been discovered dead, by her land-lady, after having turned blue in her bed. I still received the birthday card that  she had put in the mail prior to her fatal day. It arrived (featured below out of its frame) the day after I got the news that she had died, and it was to let me know she'd be thinking of me on 'my day'  as she called it, sentiments she expressed on the back of the card where she also wrote,'Will see you before long,' seen in the text-image posted below" 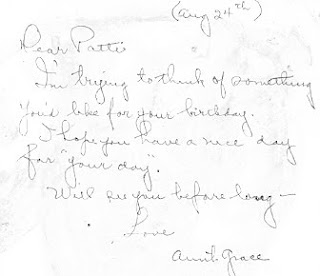 "Now at my launching of my winter-card-line soiree, we agree, "These kind of treasures aren't the same as an 'E' card that's been archived in your e-mail account-folder, with the threat of  a link breaking if you want to view it again."

Almost a year has passed since that soirée, but on this birthday of Grace Fitchie, there is still cause for paying a tribute to her influence.