The Monday after Thanksgiving 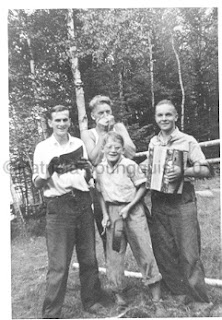 My father can be seen in this photograph playing the frying pan. His brothers are accompanying him with their instruments. Perhaps those earlier musical endeavors gave my father his apparent "love" for pop music.

As for the once-upon-a-time hit song,"Bad Moon Rising," the lyric-line is,"There'a a bad moon on the rise."

My father's version? "There's a bathroom on the right." And with Paul McCartney's, Band on the Run, where the lyric-line,"band on the run" repeats over and over again, my father's rendition was,"band with the runs."

My father's sense of humor, and apparent relationship with songs, remained with him throughout his life. Even at the very bitter end, when he had hoped to be out of a hospital where he had been for treatment due to severe consequences of emphysema, he recorded a tape giving Louis Armstrong "a run for his money".