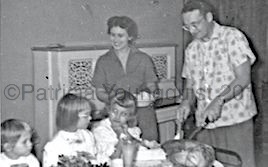 Following up to yesterday's post, I will tell you that my father did not leave the hospital on the "Monday after Thanksgiving," as he had hoped to do, which is indicated in the audio playing during the video clip in that post. Instead he was still in the hospital on the "Monday after Thanksgiving" and declining quickly. He died a week after that Thanksgiving — November the 30th, fifteen years ago today at 7:35 AM, due to complications with septic shock.


The year he died, Thanksgiving Day was November 23rd. He had evidently recorded a tape (that is being played in the movie-clip in yesterday's post) on the eve of that Thanksgiving, November 22nd — the day Kennedy was assassinated thirty-two years prior — as I recalled in an earlier entry.


My father had been in the hospital due to consequences brought on by severe emphysema, which was caused by his intense Pall Mall cigarette smoking. Although he had quit smoking a few years prior to his death, his wife continued to smoke. He insisted her second hand-smoke did not bother him, and even through his wheezing, as he was declining severely in health, he joked that when he died, the tobacco industry would raise the price of cigarettes in a phenomenal way, saying they would begin to miss his revenue.


My father may not have been prophetic about the doctors having him out of the hospital the Monday after Thanksgiving; but he was right on the mark about the rising costs of cigarettes. I am a non-smoker, but am very conscious of cigarette prices because I live in New York City, where our Mayor Bloomberg has not only managed to raise the taxes and costs on cigarettes; he has banned them from restaurants and bars stating that secondhand smoke contributes to high rates of asthma and cancer while poisoning the air. Bloomberg' latest attempt on banning smoking is to disallow it in parks, beaches, and even in Times Square. All of these actions by Bloomberg make me think of my father's "prophecy" regarding cigarettes — even though it has been fifteen years since he died; survived by his wife, her children, a brother, a sister, an adopted son, my mother (his first wife), and my two sisters and me.

The loss of my father through this horrific death still resonates for me, although I am not certain how much it reverberates in my sisters' lives. The last time we were together as three sisters (I have seen them both separately on many occasions since that day) was when we were all gathered in the intensive care waiting room — pulling "all-nighters" —  and going into his hospital room to see him one at a time — even though he was hooked up to tubes and the only way we knew he was alive was by the monitor in his hospital room.

I was the last one in the room before he died and I told him, "I'll be OK," and the monitor instantly went blank. His wife had left earlier to go their house to get some rest. Upon being informed that my father had died, she was furious that he had passed away without her being by his side. Later she begrudgingly handed my sisters and me copies of the tape he had made the last week of his life (which plays in the clip in yesterday's blog entry).

Today, as I recall the day my father died, I think of the character, Olga Seregeyevna Prozo (Olya), one of three sisters from Anton Chekhov's play, Three Sisters. As you may know, this play begins with Olga speaking to one of her her sisters saying, "Father died a year ago today. May fifth, your saint's day, Irina. It was cold and snowing; I don't know where I found the strength to get through that day."

As for me, I found the strength to get through 'that' day of my father's death by prayer, and a stiff cocktail, though not necessarily in that order. My father's death should not have been such a loss to me that November of 1995, a week after Thanksgiving. For my father as I knew him on a Thanksgiving in 1963, when I was a child (depicted in the photograph at the top of this post), the Thanksgiving after  John F. Kennedy had been assassinated, had died long ago, when he left our family that following year. And as for my sisters, if they are reflecting on my father's death perhaps they are like Olga's sisters — for when Olga recalls their father's death, her sister replies, "Why think about it?"

Why think about it? To mourn? To relive? To rewrite family history? May all my readers be blessed with any needed consolation over a lost loved one, as each one of us moves into the holiday season. I'd like to second what my father said in that tape he recorded eight days before his dying day: "I want to wish everyone a lot of love at this time of year."
Posted by The Last Leaf Gardener