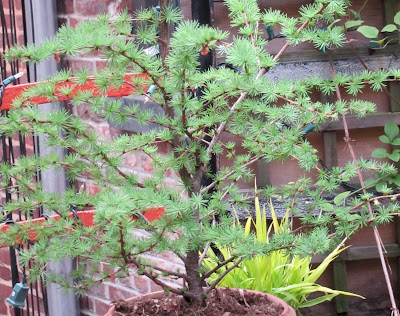 This very sweet tree, my Japanese Larch Larix kaempferi; 'Karamatsu,'  was one of my favorite trees, given to me by a gardener, Jay, because it was a favorite of his, but he had no place to grow it and he knew I would take care of it. The tree was very small when Jay gave it to me in the fall of 2007. The winter of 2007 was the first year I used a cold-frame (discussed in a previous post), but the precious little Larix kaempferi did not need to be put inside the frame. Instead we placed it against the cold-frame to shield it from the wind.
As is the case with this variety of larch, all the delicate needles (which were very sensuously soft) fell off, but the following spring (2008), the little needles came back, resembling little baby teeth, but with a green more brilliant than I had ever seen; and as the spring turned into summer, those needles got to their 'normal' size, as seen in the photograph at the top of this post. They remained that way until the winter of 2008.

My friends, family and colleagues who have visited my garden have always commented on this sweet plant. It was a favorite. Perhaps by now you have realized that I've written about my little 'Karamatsu' in the past tense. This is because, suddenly without warning, this past August, it died, the victim of grubs. I am very sad to have lost this little guy; and, to add insult, the maudlin lyrics of Bobby Goldsboro's song (Honey) keep running through my head. " . . . when she planted it, it wasn't big . . ." 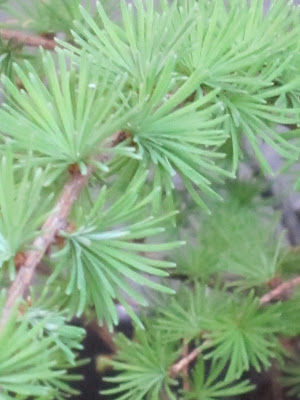