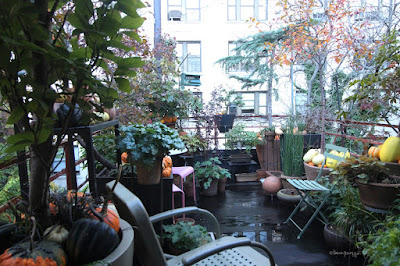 This past Wednesday was unseasonably warm for November which was a perfect time to plant tulip bulbs. Nearly every November for a number of years (and often under nasty weather situations),  Juan V has planted an array of tulip bulbs in my garden (a partial view of it can be seen in the image atop this entry).

In any event over the years the bulbs he has planted have produced extraordinary and unusual tulips, many of which are included in volume one of my book series, Words In Our Beak as well as in posts within this blog.

On occasion, once my tulips have had a blooming period, certain varieties have come back the following year or even years; but for the most part, in spite of them growing in awesome containers, filled with rich soil, they have a short duration in my place.

We were not able to plant bulbs in 2019, and then, because of the long lasting lockdowns in 2020 due to consequences of the coronavirus pandemic; nothing was planted.

Therefore, this year's bulb planting was quite special. The bulbs we chose  — if all goes well — will produce tulips at different times so the activity in my garden should be on going.The first ones to bloom are likely to be ones known as Tulip Giuseppe Verdi, which come under the classification Kaufmanniana tulip. We put them two containers that are identical (one of them can be seen in the next image). 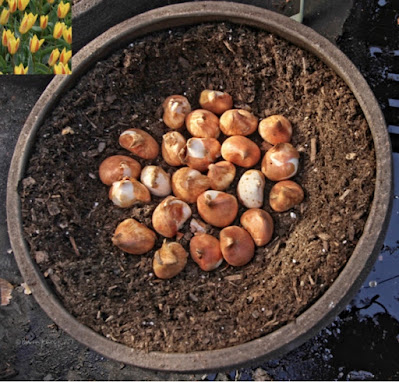 The bulbs are gorgeous! It's no wonder they are known to produce such stunning flowers. I've had this variety before (begining in the year of 2012). They are early bloomers.
Another variety that we planted is known as an Apricot Sensation or Apricot Inspiration.
Their bulbs who will be living in two separate shallow bowl style containers (one can be seen in the following picture). 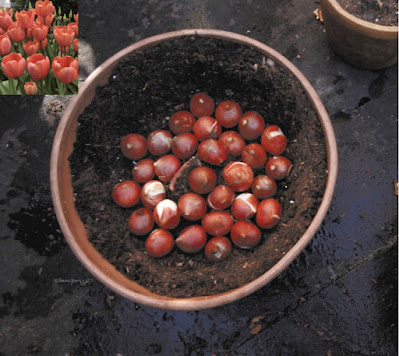 This variety is "scheduled" to bloom in late April and/or early May and it will be the first time I've had this tulip type.
A tulip variety who should also bloom in mid spring is known as the Little Princess, she is also a type I've never had.
Her bulbs were planted in three containers, all them shallow with a rectangle shape as seen in the photo directly below.

These bulbs are lucscious looking and I hope her flowers will be too!
A variety who will be blooming in late spring is known by the name Flaming Parrot (I've had this beauty in bygone years and she is also featured in all versions of volume one for Words In Our Beak). 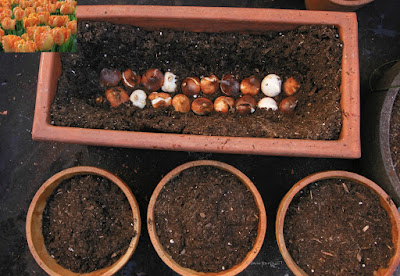 We divided her bulbs into four containers, one has a large rectangle shape, the other three are circular (eight inches wide, six inches tall), as evidenced in the next photo-op
And last, but hardly the least, we planted a variety known as Purple Sensation.
Her bulbs are divided into four separate identical containers, one of them can be seen in the image directly below. 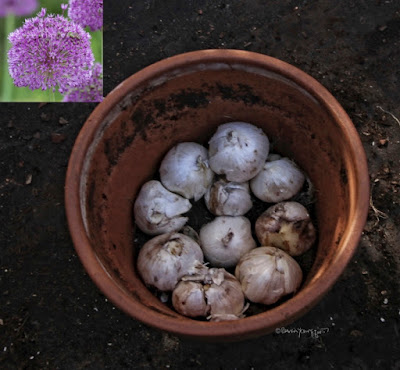 Her bloom time is late spring to early summer. This will be the first time I've had her specific type but I've had (and still have) other flowers who look similar.
Looking forward to seeing the insects and birds she attracts!
Posted by The Last Leaf Gardener