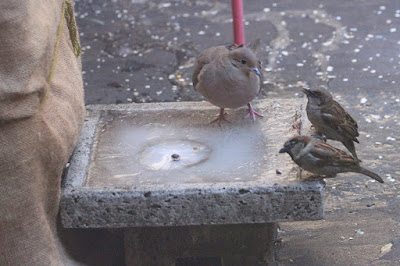 I am always humbled, honored, thrilled, entertained and educated when birds visit my garden (which is atop a roof extension in NYC).

One dreary cold day (this past winter) I caught a glimpse of a lone Mourning dove having a conversation with a male House sparrow while they perched on the edge of a bird bath which was mostly filled water.

Another male House sparrow cocked his head to eavesdrop.

[Both of these bird types are included in all of my books which have Words In Our Beak in their  title and they are also featured in BIRD TALES. Info re all of these books can be found by clicking here.]

According to a page within Wikipedia, "The verb eavesdrop is a back-formation from the noun eavesdropper ("a person who eavesdrops"), which was formed from the related noun eavesdrop ("the dripping of water from the eaves of a house; the ground on which such water falls")."

This source goes on to say,  in bygone years, "an eavesdropper was someone who would hang from the eve of a building so as to hear what is said within. The PBS documentaries Inside the Court of Henry VIII (April 8, 2015) and Secrets of Henry VIII’s Palace (June 30, 2013) include segments that display and discuss "eavedrops," carved wooden figures Henry VIII had built into the eaves (overhanging edges of the beams in the ceiling) of Hampton Court to discourage unwanted gossip or dissension from the King's wishes and rule, to foment paranoia and fear, and demonstrate that everything said there was being overheard; literally, that the walls had ears."

Not to be outdone by the House sparow who was listening intently to the chirping of the Mourning dove and the other House Sparrow, I cocked my head to eavesdrop, for whenever I hear what birds have to say, I learn something!