Saturday's Sequel (to my garden's flora and me being violated). 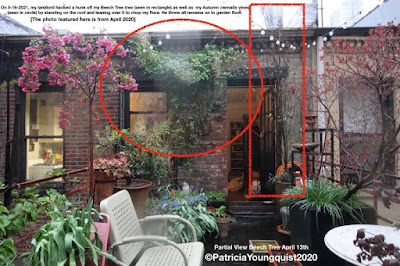 Yesterday Juan V came by my rooftop garden to assess the damage my landlord (FA) did to my flora this past Saturday evening (which I discussed in my 5-18-2021 post here on Blogger. It turns out he has really damaged my Beech tree. I’ve had her since the mid 2000’s and she can be seen within the rectangle affixed to the image of directly above posting. FA hacked at her so badly that he split her top in two.

Moreover he took such a huge hunk off of her that the container she lives in now seems oversized.

Additionally he ripped a good portion of my Autumn clematis’s (featured within the circle affixed to the aforementioned image) buds, flowers and foliage right off the vine and threw everything to the floor of my garden. I’ve had these vines for a bit longer than I’ve had the Beech tree and I included them in my garden-themed movie, The Kiwi Speaks! Fifteen Minutes of Fame… almost.

[This movie can be viewed within my Vimeo and/or You Tube Channels.]

I am truly grieving re the loss of these flora varieties whom never hurt anyone. Plus I’m shaken up by the violence and invasion that I’ve experienced.

Just as one might do when they lose a pet or a loved one, I’ve been going through my photos of the Beech tree. It looks like that even though I’ve had her since the mid 2000’s, I did not take a picture of her until 2010 (a copy of it can be viewed directly below and I've affixed a rectangle to the picture to indicate her location. 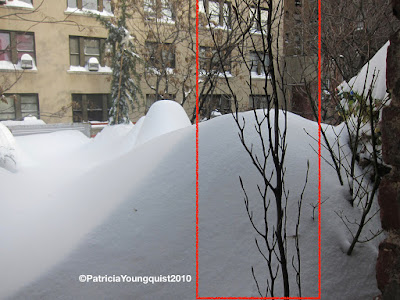 I got her at a nursery in Brooklyn and carried her home on the subway. She thrived in my place and her container had to be replaced a few times as she out grew it. I’ve had her in various places of my garden and had she been in another spot during the attack, FA would not have been able to reach her.

I’m truly frightened by the fervor of FA’s hate-filled mission as it is very dangerous on our building’s rooftop and easy to fall off — especially if you use a cane which he does.

On another note, I’ve spent my grieving time going through photos of her, which I guess is what one does upon losing a living “thing.”
Copies of pictures I've taken of her over the years are featured in the somewhat lengthy (after all I've had her for so many years, it's not surprising that I took so many photos) sequence below where I've affixed a red rectangle to each of them to indicate her location within my garden. 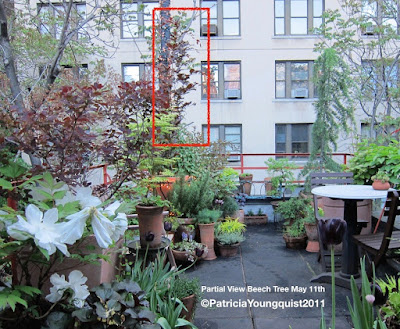 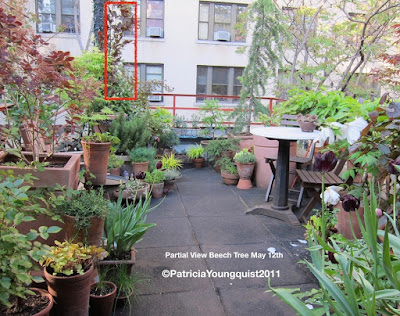 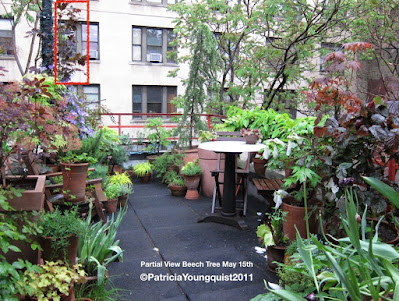 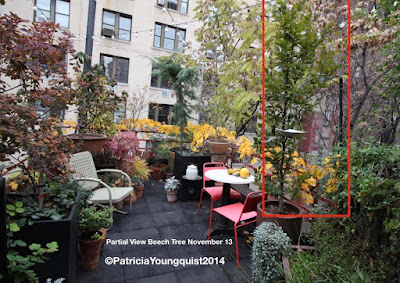 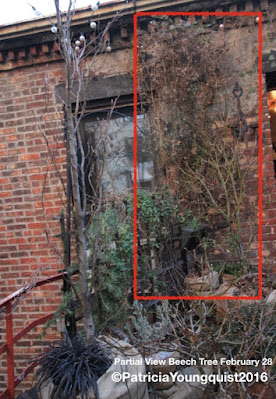 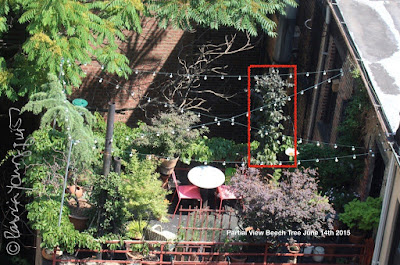 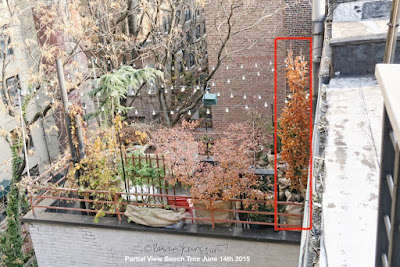 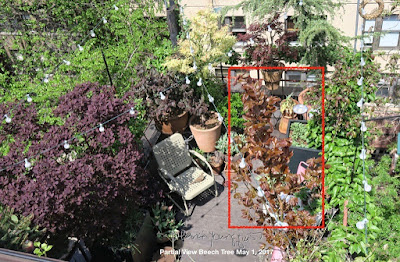 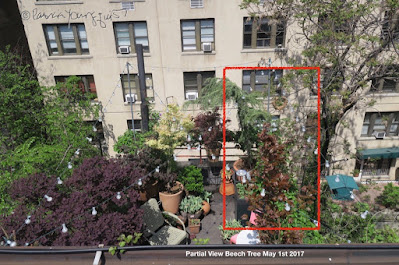 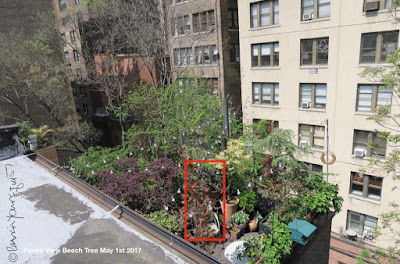 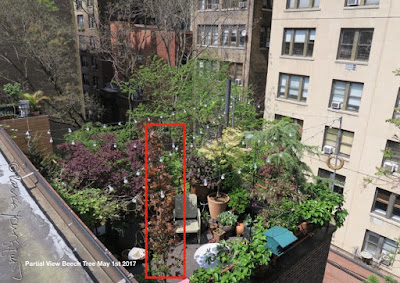 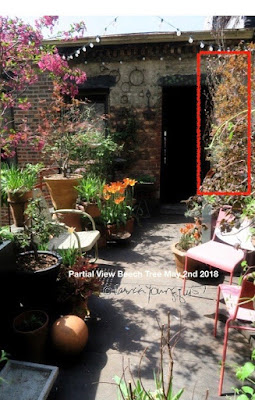 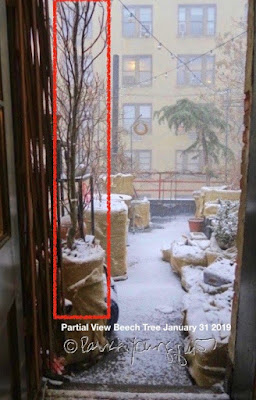 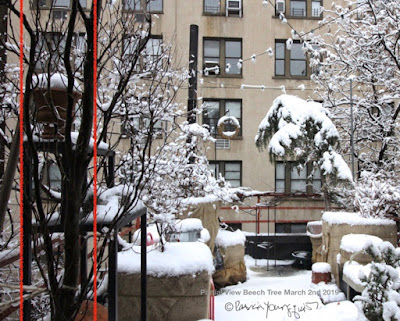 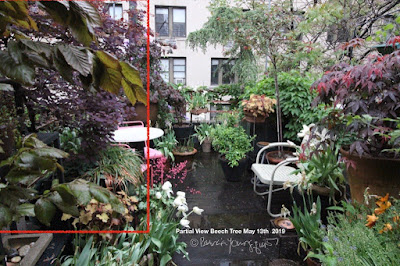 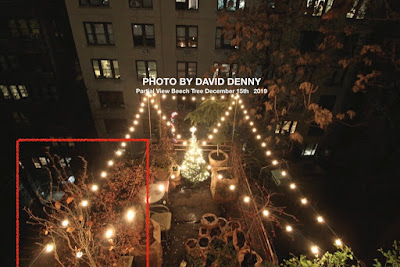 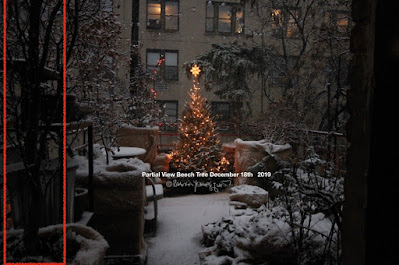 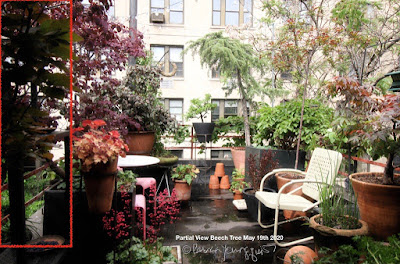 I'm doing my best to heal from the recent actions of my landlord and to focus on moving ahead as well as enjoying my garden, which as you may know, is the setting for my three volume series hard-cover book series, Words In Our Beak.