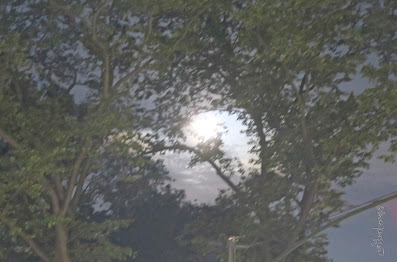 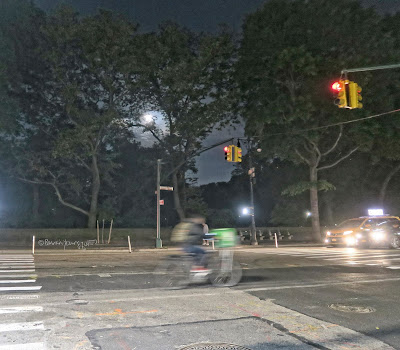 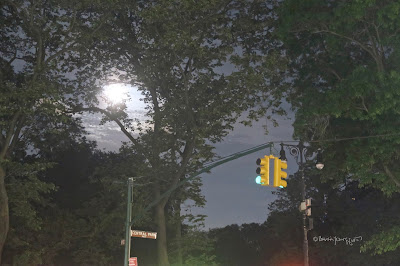 Last night when I was speaking by phone with my friend CF (who has been "temporarily" living out of the city for a little over one year, due to the coronavirus pandemic and the need for her and her husband to move into the house where his mother lives, which is in a  NJ town); she remarked on how beautiful the moon looked —  something that would've been harder to view in NYC than in the rural area where she is staying.
It was only my hearing her remark which prompted me to remember that I had heard about how the moon would appear when listening to the morning news and I had made a mental note to myself to go out to see it.
However, after dealing with my computer pick up, and issues related to reinstalling my machine, I forgot all about it.
After she told me about what she had seen, I immediately went to the end of my street to see if I could catch a glimpse of it as I could not see it (even through a long lens) when standing in my garden.
When I got to the corner, I could catch a glimpse of it but in my excitement re the possibility of seeing it, I only had my pocket  camera with me, not my long-lensed DSLR.
With city lights it is difficult to observe the brightness of the moon without going deeper into Central Park.
However doing that at night is not safe or wise, so I took a few snaps from the stret corner and just reflected on the phenomenon of this special moon, known as the Flower Moon.
Many sources re last night's moon offer wise words and concur on how it came to be called the flower moon, aand in honor of this recnt event, I wil share them in this segement of Wednesday's Wisdom:
"The Full Moon of May is known as Flower Moon to signify the flowers that bloom during this month. ... Other names for May’s brightest Moon phase are Corn Planting Moon, Mother's Moon, and Milk Moon, from the Old English Rimilcemona which means Month of Three Milkings, when cows were milked three times a day."
Be that as it may, re this May moon, upon seeing it, I found myself singing the Cat Steven's lyrics, "....I'm being followed by a moon shadow, moon shadow...."
Posted by The Last Leaf Gardener