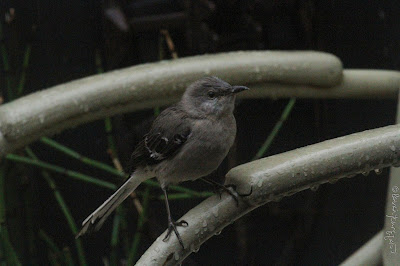 The first half of this month has certainly lived up to the adage re April having showers, however this year they could be taking away May flowers, as the rain has been more like torrents than showers. Flowers are falling off their stems as a result and flowering trees are dropping their blooms. Such heavy precipitation often begs the question, Where do birds go when it rains?
A number of interesting articles have been published about this, including one by Chipper Birds. As for me, I often know where they go because a number of songbirds spend their rainy days in my garden. This is something I mentioned in a recent post here on Blogger which includes a male cardinal visiting my place during a rainfall.
During yesterday’s heavy rain several species spent time in my place, including a Northern mockingbird and an American robin (the bird types featured in the photographs atop this entry).
These birds along with an array of other bird types are featured in my three volume book series,  Words In Our Beak.