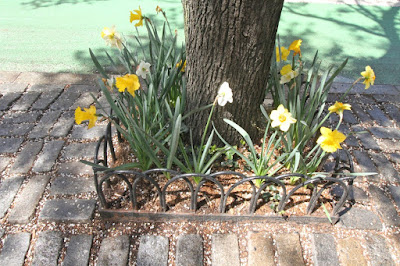 In the photo directly above, a few daffodils are catching some shade from the sun's rays by being within a sturdy, masterfully crafted tree pit. CURBED reporter Diana Budds calls these structures "micro-Edens," but the city's parks department calls them "tree pits."
In an article, Budds points out "as the pandemic has slowed some of us down, allowing for the appreciation of parts of our neighborhoods that might’ve gone overlooked. Things like the humble 'tree pit,' which is what the city Parks Department calls those scrappy patches of dirt surrounding street trees that it is in charge of maintaining. There are at least 700,000 of these microparks (700,000 being the number of street trees catalogued with the Parks Department; there isn’t a count on the pits themselves) in various states of cultivation. When untended, they can become weedy and overrun or left to become a dog’s bathroom. But green-thumbed, space-starved New Yorkers who manage to keep the pups and the wild delirium-inducing weeds at bay are able to carve out beautiful micro-Edens in these often neglected plot."
I've always appreciated these "mini gardens" and the next two picture feature ones filled with tulips. 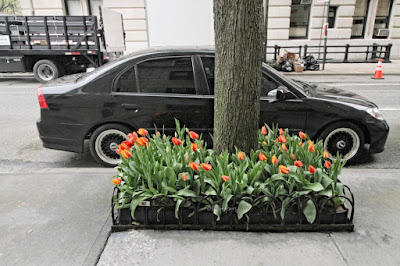 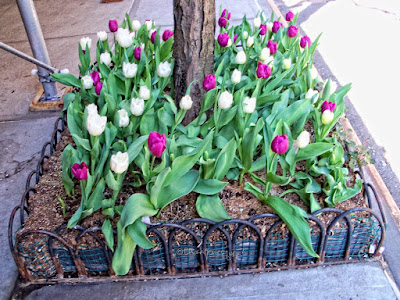 On another note, tulips that have grown in my garden, are featured in volume one of my book series Words In Our Beak.

The goal of these books is to open readers to a simple understanding of the winged world and their environment. Set in my rooftop urban garden in New York City, my story is told in the voice of Cam, a female cardinal, who visits it. These books are directed to children and adults who are curious about birds (as well as gardening) want to learn about these topics from a unique perspective.

But I digress! Getting back to tree pits, I'll conlude my post by saying I recently learned that not having a green thumb wasn't a deterent to the owner of a UWS eatery  (Lokal Mediterranean Kitchen, 473 Columbus Ave in NYC), in "planting" a tree pit. He used artificial flowers as seen in the next picture. 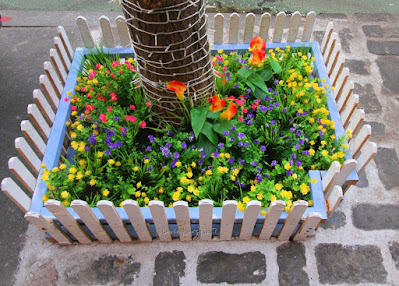