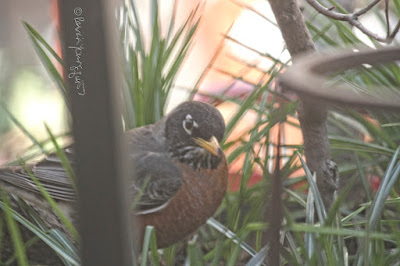 It is such a blessing to be visited by a robin anytime but especially on Holy Saturday (which is today). Did you know that robins (the bird type featured in the image direcly above) are associated with a tale about the crucifixion of Jesus?One scholar, Mario Conte describes it this way, "...Jesus was breathing heavily under the Cross on His way to Calvary when a small brown bird called Robin, which was flying nearby, was drawn by the crowd gathering around the suffering man. The little bird wondered why all those people were following the man and, after a closer look, was heartbroken to see that the man was suffering great pain due to the weight of the Cross. Droplets of blood issuing from a crown of thorns that had been placed on the man’s head were trickling down along the noble features of His face.
"'Where are they taking this poor man?' Robin said to himself, feeling all the more drawn by this highly poignant, bizarre spectacle.
"Finally, the sad procession stopped on top of a hill called Golgotha. The soldiers escorting the condemned man, who were also carrying whips, hammers and long nails, removed the Cross from the man’s shoulders and then stripped Him. They then made Him lie on the Cross and, to the little bird’s horror, proceeded to nail the man’s hands and feet to the Cross.
"Robin immediately tried to stop them by grabbing those nails with his beak but, no matter how hard he tried, he could not lift those heavy nails from the ground.
"The Cross was raised and the man’s agony began in earnest. Every now and then Jesus raised His suffering eyes to heaven, which grew dimmer with each passing breath, and the little bird suffered along with Him. At a certain point the idea came to Robin that he could at least lessen the man’s suffering by removing one particularly nasty thorn that was sticking deeply into the man’s temple making Him bleed along the face. With immense effort the little bird grabbed the thorn with his beak and, with a sharp pull, managed to extract the thorn. Soon after this, however, the man died.
"Robin then returned to his nest, but discovered that the plumage on his breast had been stained with blood. So Robin flew to a pond and tried to wash the blood away, but not only did the stain not go away, it actually became brighter and brighter, of a radiant ruby red color. In the meantime Jesus was buried, but on the third day He rose again.
"The Risen One was walking along a country road leading to a house where a group of His disciples had gathered in fear of the future when He realized that a small bird was flying over His head. Yes, it was that same kind-hearted little bird that had extracted the thorn from His head. Jesus recognized him from his particular flutter and by the red stain on his breast.
The robin who came to visit my place seemed pleased that I knew the story as evidenced by the expression on the creature's face in the followimg images. 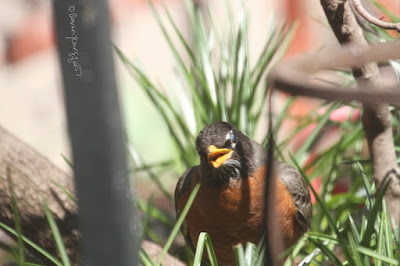 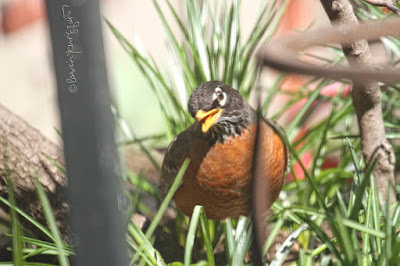 This bird type is featured in volume three of my book series This bird type is referenced in all the books and have their own chapter in volume three.
The goal of these books is to open readers to a simple understanding of the winged world and their environment. Set in a rooftop urban garden (mine) in New York City, my story is told in the voice of Cam, a female cardinal, who visits it. Words In Our Beak is directed to children and adults who are curious about birds, and want to learn about them from a unique perspective.
These books make a perfect gift any time but especially at Easter, the season begins tomorrow, Sunday, April 4th and lasts for 50 days.
Posted by The Last Leaf Gardener