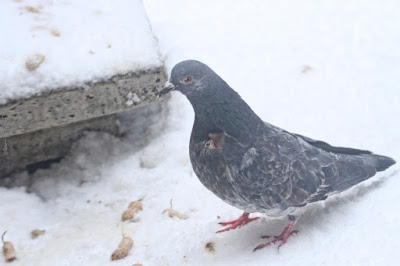 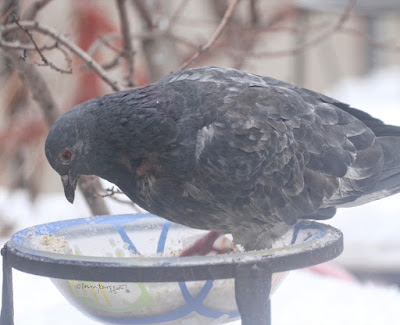 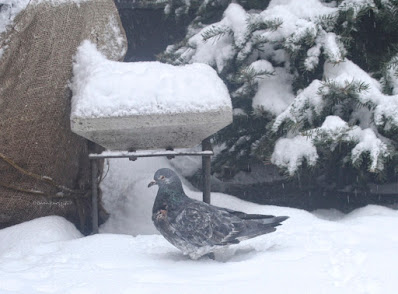 During yet another snowstorm which occurred in my area this past Thursday, it was very discncerting for me to notice a pigeon's (seen in the three images atop this entry where he is in my garden) injury through the long lens of my camera.
I surmised he may have been attacked by an American kestrel who had been in my place during part of the snowstorm. Images of him can be seen in the next sequence. 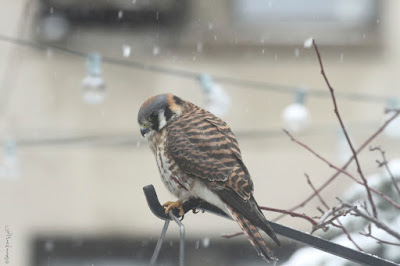 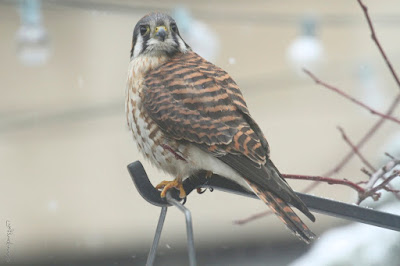 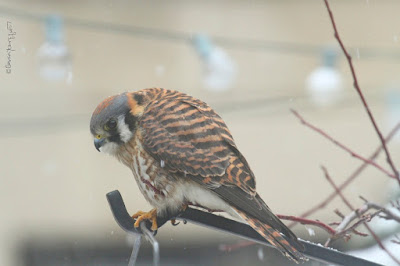 Therefore I reached out (via FB) to bird rehabber extraordonaire, Amanda Remsberg to see if she could advise me re how I might help this bird. The following is a transcript of our correspondence:
ME: I'm trying to PM you and FB "sends" it to you but then it disappears. Has something happened to your account?
AMANDA: Amanda Remsberg Patricia Youngquist goodness, I hope not! Let me check msgr...internet has been sketchy ... I just sent you a message...
ME: I did get your FB msg but have tried 3 times to PM you re a pigeon. My work around is to pose the question in a FB post which I've now done.
AMANDA: That looks like an older wound, not fresh. As long as he is doing his thing, I wouldn’t worry about him currently... no blood, and the little white sheaths mean the feathers are growing back. That pigeon looks like he can hold his own against the kestrel. Beautiful pics....The way I look at it is that the hawk needs to eat too.
ME: So I shouldn't knock on my window next time?
AMANDA: Yes the pigeon seems resilient.
ME: I think he/she is young?
AMANDA: Mature pigeon, male by the look of it, and I don’t like to see hawks kill birds either, but winter is hard and they will die if they can’t eat too.... your kestrel was probably after a sparrow sized bird.
ME:  There were plenty of sparrows, juncoes and starlings as well as pigeons; but I did have a lone jay, a lone robin and a lone mockingbird visit too. Thanks for the info.
I am most grateful to Amanda for her insight into this matter and told her from now on. the quote, "His eye on the sparrow," will have a new meaning for me.
On another note, all the bird types referenced here featured in my three volume hardcover book series,  Words In Our Beak.