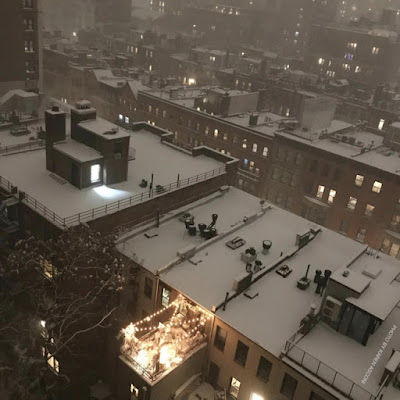 The photo atop this entry was featured in my December 17, 2020 blog post where I mentioned the atmosphere that a then recent snowfall and readers could "see how my garden [It is under the string lights seen in this picture] looked in relation to the buildings in close proximity."
That magical atmosphere became creepy this past Sunday when a group of teens were on the rooftop and tossed a substance on to my garden's floor.
My place is located on the back of an UWS brownstone and across the courtyard there are high-rise buildings. Because we are in the season of winter, the trees do not have foliage and it is easy to see other apartments.
This proved to be a blessing, for Sunday night (1-24-2021), I was alerted to the fact that some teens were on my rooftop and “throwing things into my garden.”
In addition to informing me, they had called the police, for evidently the teens were marching across the rooftops which are attached (hence the term row houses).
I let her know that it did not appear anyone had thrown “things” into my garden but that I thought I saw snow. 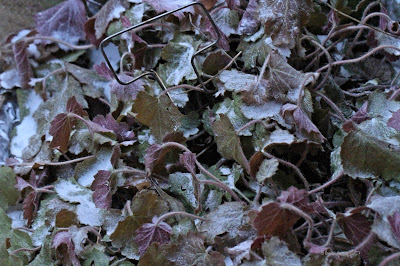 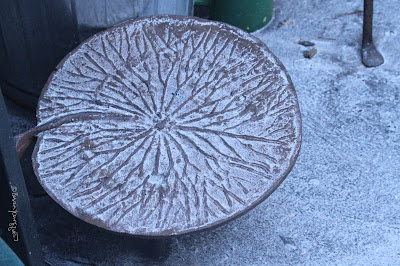 It wasn’t until the following morning that I made the connection that the “things” she saw them throwing were white substances, which I had perceived to be snow.
If you take a close look at the next image, you will notice that the white “stuff” on the blacktop only overs a portion of the terrace. 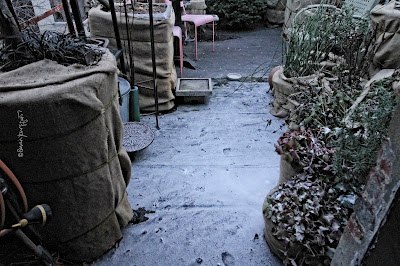 For this 202nd segment of my Tuesday's Truths series, I’d like to let my readers who are Upper Westsiders know that these teens have been gaining access into brownstones (by people who carelessly buzz them in) which unfortunately a woman who lives in my building did this past Saturday.
Once inside the teens came up to the top floor where a ladder that provides access to the latch for opening the roof can be found... 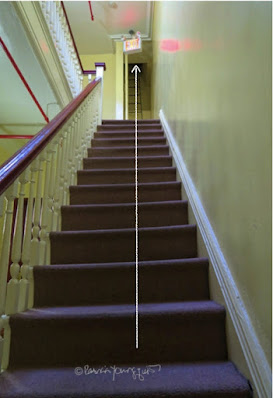 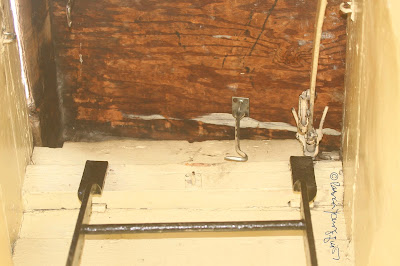 ...and from there they walk across the rooftops to other buildings...
So while it wasn't prudent for the woman in my building to not be mindful who she buzzes inside, they are gaining access through rooftops and I feel very vulnerable being on the top floor.
Moreover I've encountered them in my hallway.
I have been contacting the police department to see if someone will come test the substance but I called the precinct and was told they didn’t do this so I should just clean it up.
I’ve made a second call to my Assembly Woman’s office to see if they can help with my getting the substance tested.
I’m not only concerned for myself,  I'm concerned for my flora and for birds who visit my garden.
The song, Up On The Roof,  has a lyric line which states, ...On the roof it’s peaceful as can be... — but be wary it may not be so peaceful up on your roof — if it is inside a brownstone.
-----
My garden is the setting for my three volume book series, Words In Our Beak...
...and the stories are told in the voice of Cam, a female cardinal, who visits it. She and many members of the avian community find peace here, as do I, and I hope as well as pray it is never disrupted by situations like the one I've described, or any other circumstance for that matter.
Posted by The Last Leaf Gardener