Whenever I'm having a bad day (which is all too frequently lately), I think I'm not so bad off as I needn't worry about having a window crash. This past Sunday (9-27-2020) I found the victim of such a tragedy on CPW (seen in the image directky above) on the UWS in NYC.
I brought the creature to The Wild Bird Fund (WBF), but alas life was over for this sweet one.
This organizartion has recently been reporting that a large number of warblers have been involved in window crashes as this is migrating season. They have advised folks to bring birds they spot on the ground, who may appear dead, to their facility, as the bird could be alive, but very dazed and confused.
I did not think the sweet creature I came upon was alive, but I still took him/her to The WBF on the off chance I had misinterpreted his/her demise.
Unfortunately, this absolutely adorable innocent creature was dead upon arrival at The WBF, but I do take solace in taking this bird to them, because he/she will have a better burial than what might've occurred had his/her presence been ignored AND by my bringing a bird to The WBF, I think it increases their chances of raising awareness and/or obtaining funding.
By the way, The WBF along with a rescue story is referenced in my book series, Words In Our Beak. 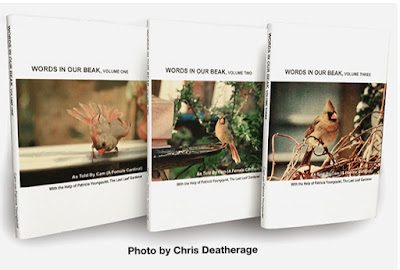