The Anemones, the Onion flowers and the Crepe myrtle, are all in bloom again! (Tuesday's Truths WK 193)


For this week's episode (which is #193) of my Tuesday's Truths series, I'd like to tell you that a sign indicating the fall season is well on its way to NYC —albeit not officially until over one month from now on September 22 2020 — is appearing in my rooftop garden: My autumn Anemones are starting to bloom again, as evidenced by the photo-ops atop this entry which I took this past Saturday morning, August 15 2020.

As you may know, dear reader, this garden is the setting for my book series, Words In Our Beak and numerous varieties of flora are discussed within them...


... however, at the time of these books were published, I was not growing Anemones but during those years I did admire this flower variety whenever I was it flourishing within gardens in my 'hood and nearby parks.

Finally in late 2018 and throughout 2019, I began to grow my own and continue to be awestruck by their appearance in my place. I'm hardly alone in my feelings about this flower type.

According to an article (by Robert Herman) posted on one of fine-gardening web-pages, "Asters and Mums aren’t the only perennials that brighten the late-season garden. Fall-blooming anemones (Ane­m­one spp. and cvs., USDA Hardiness Zones 4–7) also bring a refined and elegant touch of beauty to an autumn landscape when delicately beautiful flowers burst open atop the plant’s willowy stems. The white and pink blossoms illuminate the garden..."

In any event, after the first blooms of  one of my Anemone varieties appeared on Saturday, the following day (Sunday August 16th), I thought I might lose my blooms before the onset of the fall  season because we had torrential downpours for most of the morning into the late afternoon.

Sometimes heavy rainfall can knock off the petals and blooms of flowers. The following pictures show how they looked in the early stages of this past Sunday's inclement weather.


The Anemone plants featured in the images here are located on the west side of my garden and I have another variety that is beginning  to bud (but not flower yet) and her foliage can be seen in the next two image, hiding behind my lavender-colored onion flowers. 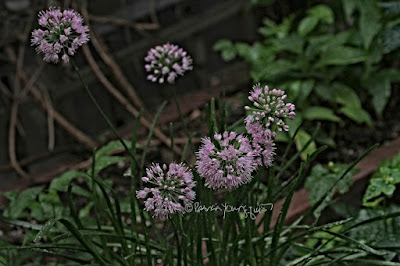 Near to these particular flowers is where my Japanese Red Maple (AKA ('Tamukeyama') lives and he is already beginning to wear his autumn colors, as evidenced below.


Not one to be outdone by blooming flora, my Crepe myrtle (AKA Lagerstroemia), who currently lives at the northern end of my garden, is busy keeping up with appearances by producing a large number of tiny flowers which have a hot-pink color. They can be seen in the photograph directly below, where she is standing at the right towards the back.

I'll conclude this post by letting you know that the squirrel who has been visiting my place (on a regular basis since July 8th 2020) took time out from noshing to gaze at the awesome blooms on my Crepe myrtle, as evidenced in the next set of pictures.