1st Sunday in May in Bygone Years & Now 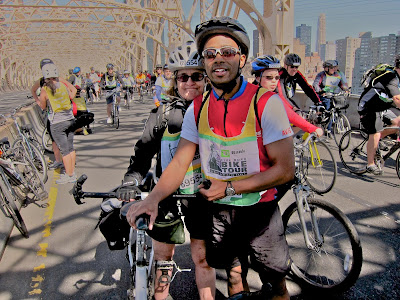 Under "normal" circumstances, The TD Five Boro Bike Tour would be occurring today, as it always takes place on the first Sunday in May.

I participated in it as a stoker on a tandem bike for a number of years, including 2011, when Max was my captain. In the photo directly above, we are on the 59th Street ("Feelin' Groovy") Bridge and as you can see, there would be little social distancing at such an event.

This past March, Bike New York stated, "we regretfully announced that the TD Five Boro Bike Tour would not be held as originally planned on May, 3, 2020 due to the COVID-19 pandemic.

While New York City officials marshal every available resource to slow the spread of the virus and save lives, we continue to discuss alternative dates for later in the year. We’ll keep you apprised as these discussions progress.

Be assured, the health and well-being of everyone participating in and supporting the 43rd Annual Tour is our top priority. And we’re grateful for your patience as we navigate this unprecedented global health crisis. We’ll communicate promptly once more information is available and conversations with our partners in City government have concluded.

Until then, please take care of yourselves, stay healthy, and be safe. We’re in this together."

I am grateful to have been able to participate in it for a number of years and I'm sorry for those who had probably looked forward to being a part of it this year (it was not in my plan) but there will be other opportunities if everyone does the right thing now; so please keep safe and remain hopeful for better times.

On another note, The 59th Street Bridge, is also known as The Queensboro Bridge and The Ed Koch Bridge. It became known as The Feelin' Groovy Bridge due to a song of the same name by Simon and Garfunkel.

They can be seen (in the video below) performing it to a very packed audience at an outdoor concert in Central Park that took place in 1982.

Events like the Five Boro Bike Tour and outdoor concerts in Central Park are all on hold for now as NYC looks at how to reopen after the pandemic.
Posted by The Last Leaf Gardener