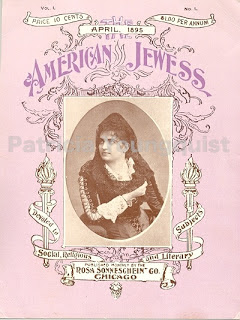 I don't want this Tuesday to pass without my mentioning that I'm thinking of the Jewish community with this evening's onset of Yom Kippur which will began at sunset this evening.

I have Jewish roots that I did not learn about until 1989!

Evidently, Fanny 'Wink' Sonnenschein, my father's grandmother, and my great grandmother, had the same eye affliction that I have.

One of her eyes performed so much less than the other, that she was nicknamed Wink, by her mother, Rosa Fassel Sonnenschein - the "flamboyant editor and publisher of The American Jewess."

The American Jewess, was an independent American Jewish magazine, published (1895) by a woman (Rosa, my great, great grandmother) and was dedicated to issues concerning women.

However, in Rosa Sonnenschein's case, I don't know if she put her photo on every issue of her publication as Oprah continues to do.

"Rosa Sonneschein (1847-1932) was the flamboyant editor and publisher of The American Jewess, the first independent American Jewish magazine published by a woman for women.

"After every meal Sonnenschein relaxed with her favorite cigar, 'Between the Acts.' She had taken up the habit when her physician suggested that an after dinner smoke might prevent the indigestion she suffered from the constant dinner disputes with her husband.

"When her four children were grown, she terminated her disastrous marriage and turned to publishing as a means of livelihood. Her magazine boasted 29,000 subscribers during its brief run (1895-1899).

"She brought to the magazine her great story-telling ability along with a global view on people and events. Most articles were written by women and covered social and religious issues as well as literature.

"In one editorial she wrote 'The New Woman! The new Woman! That is the cry on every side. But where, oh where, lingers the New Man? Is he looming on the horizon, or will the feminine phoenix still have to content herself with the Old Specimen?'

"After attending the first Zionist Congress in Basle (1897), she wrote about women's disenfranchisement with the emerging socio-political movement. She saw no conflict between her feminism and her liberal Judaism, and was impatient with all who failed to recognize women's religious equality and their potential power as change agents in the community."*

[*The quoted text is from one of my very first blog posts which was published on 1/6/2010.]
Posted by The Last Leaf Gardener