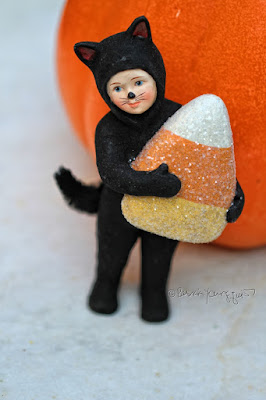 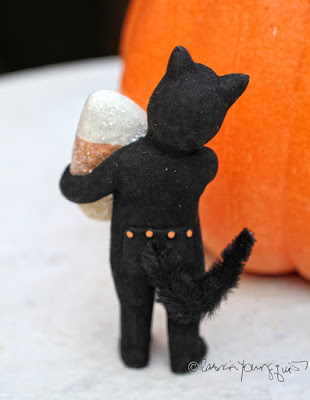 Today is National Black Cat Day. According to many sources, including holidayscalendar.com, this occasion is "celebrated on October 27th, just four days before Halloween... National Black Cat Day is a holiday which celebrates an animal (who) has an image problem. Black cats are not only considered bad luck in the United States but they are also one of the cats that is the least likely to be adopted...

While no one is exactly sure when National Black Cat Day was founded, what is known is that the attitudes about these particular felines are different during different parts of history and in different parts of the world. For example, in Great Britain and Japan, a black cat is considered good luck. However, in the United States, it has come to symbolize bad luck or evil forces. In some parts of the world, if a black cat crosses your path, then it’s considered to be a bad omen. In folklore, black cats are often depicted as agents of evil or even evil itself. In some parts of Europe, they were considered so evil that they were burned alive by superstitious villagers in giant midsummer bonfires..."

I don't have a black cat (or any cat for that matter), but I do have a figurine of someone dressed as a black cat for Halloween.

He/she can be modeling his/her costume in the pictures atop this entry.

This figurine can also  be seen in the photo below (left), where he/she can be reading what I have to say about Halloween and birds in volume two...

of my book series, Words In Our Beak.


Since I don't have a black feline or know of anyone who does, I will be honoring the holiday with a different animal who has black-colored fur.

He/she happens to be a squirrel who I saw in Central Park the other week and as you can see in the next two pictures, he/she had places to go and people to see. 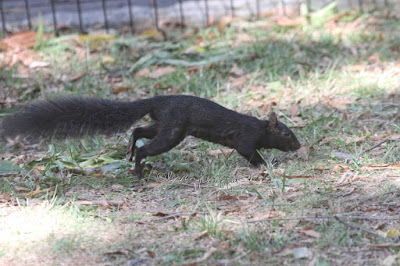 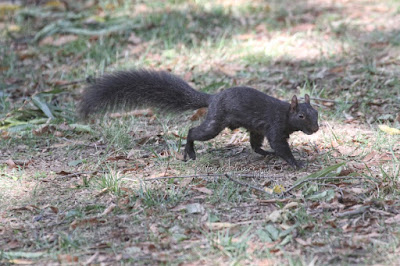 Campbell goes on to proclaim "why melanistic squirrels might be more common in an urban environment. While they’re comparatively rare outside major cities, some biologists believe that black squirrels may have been the norm several centuries ago, before large-scale deforestation."

In another article, a writer whose pen name is David suggests, "There are indications that black squirrels might have more differences from greys than just color... 'One article on the black squirrel stated, “Researchers will study whether the faulty gene, which is also found in white blood cells, makes the black squirrel more aggressive, as it does in other species.'

"An interesting phenomenon is that the concentrations of black squirrels is often reported to top out at around 25% of the total squirrel population. One reason that the black population reaches a limit has been speculated that while black squirrels are better adapted to the cold their black coat makes them easier for predators to spot...

"Black squirrels were introduced to the United States in 1902 when they were gifted to the National Zoo in Washington DC from Ontario’s Department of Crown Land.  The squirrels were released into the wild and have established a healthy community.  By the 1980s the black variants were routinely spotted in Virginia as they slowly migrated.

"Other strong populations of black squirrels have been intentionally created.  The Kellogg family introduced black squirrels to Battle Creek, Michigan.  Squirrels from this population were later trapped and used to establish colonies on the Michigan State campus.

"Black squirrels were imported to Kent State University from Canada in 1961 and are now the unofficial university mascot.

'There are several other pockets of black squirrel populations and it is not always clear if they were artificially introduced or naturally occurring."

I always enjoy encountering black squirrels in NYC and the one I saw the other day is no exception! 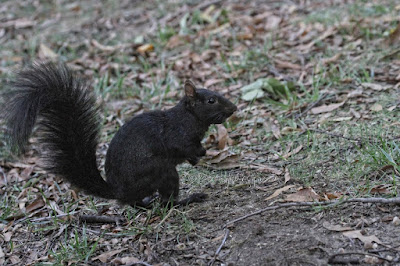 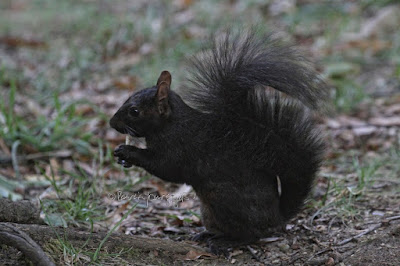 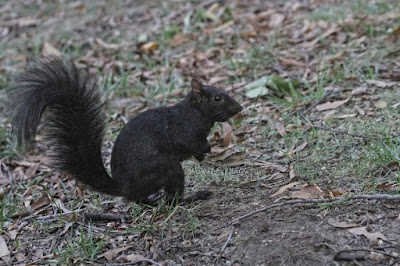 In bygone years I have written about this lovely creature within entries here on Blogger and one instance pointed out that this squirrel variety is a true New Yorker as most of us who live here tend to wear black.

So... there you have it dear reader, if you cannot honor National Black Cat Day with a black-colored feline, go out and see if there is a black squirrel in your midst.
Posted by The Last Leaf Gardener