A Raptor with a Capture 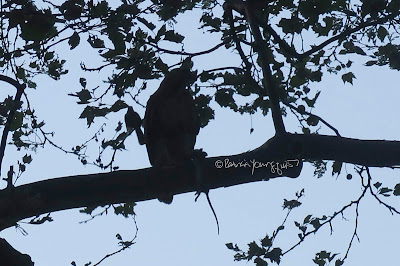 I was at the southern tip of Central Park when I noticed a large shape in one of the treetops. I had heard night herons were in the area and thought that is who the creature might be.

I did not have the camera I normally use to help me see well enough to ID and/or photograph birds, but I did have my pocket camera with me; and even though I knew I'd get very little clarity because it was mid evening, I snapped a picture with the intent of ID-ing the bird from my camera's memory card on my large computer screen.

It appears the bird I saw is a Red-Tailed Hawk and he/she had captured a rat!

There was even an eye witness to the event, for if you look to the left of the photo you might notice a small bird watching the action.

By the way, a Red-Tailed Hawk is featured in volume three of my book series, Words In Our Beak.