Today, June 5th is World Environment Day (WED). It is a day that has been set aside since 1974 to promote “worldwide awareness and action for the protection of our environment.” Last year’s theme was “beat plastic pollution," and the Mutts comic strip stop this entry, is a small reminder of how plastics can hurt members of the avian and fish community. The following photographs show how plastic (or rather how people's disposal of plastic) harms the creatures among us.

The first two pictures are ones I took in bygone years when I was at Long Beach. The second image (also taken in bygone years) features a Mallard duck, "caught" in debris within NYC's Hudson River. 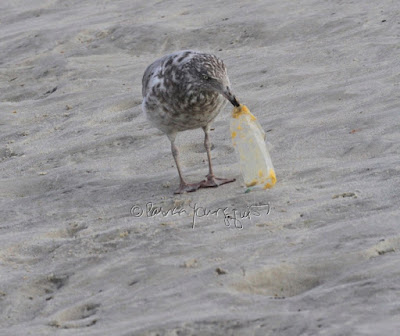 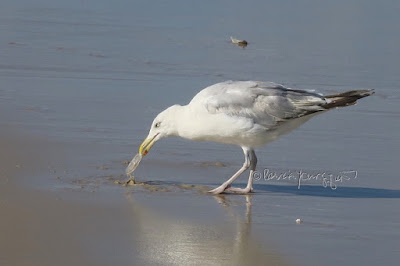 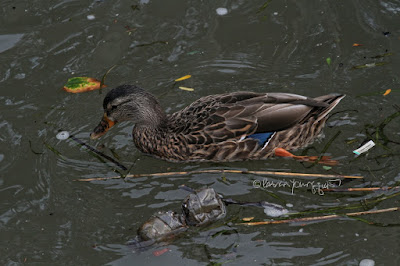 More info on 2018's W.E.D.'s theme of “beat plastic pollution," can be found within the following three links: https://theatln.tc/2sJsxya and http://bit.ly/2JeDG5l as well as https://ind.pn/2syboIG.

The way people's dispose their plastic is not the only thing harming our avian creatures.

I recently came upon a male house sparrow (in Central Park) who had discovered a wad of Kleenex some human had dropped on the sidewalk and he was tearing away at it — and I don't think he was doing this in order to get nesting material; but I made a slideshow of the incident and you can make the determination as to why this little bird was doing this.

My mini video seems to be a parallel story to an essay by E.B. White which is posted below: 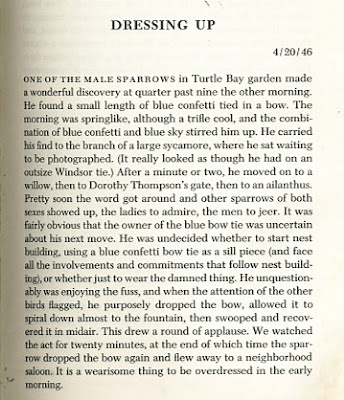 In any event, W.E.D.'s theme for 2019 is Air Pollution. As a web-page dedicated to this year's observation reminds its readers, "We can't stop breathing, but we can do something about the quality of air that we breathe."

And they go on to say, "Approximately 7 million people worldwide die prematurely each year from air pollution, with about 4 million of these deaths occurring in Asia-Pacific. World Environment Day 2019 will urge governments, industry, communities, and individuals to come together to explore renewable energy and green technologies, and improve air quality in cities and regions across the world."

Because 2019's World Environment Day, is occuring on a Wednesday, which is the day of hte week I dedicate to Wednesday's Wisdom here on Blogger, please let me say this:

I strongly feel that if the general population were introduced to members of the avian community, in a personal way, they might get to know these creatures in a manner which would ultimately cause them to be more proactive in efforts to protect fauna.

One way people can get to know birds on a personal level and from a unique perspective is from the book series, Words In Our Beak (pictured below):


The stories in these books are told from the perspective of a female cardinal (Cam) who knows a thing or two about the challenges of life. Perhaps upon reading the Words In Our Beak book series, people will be inspired to take action re caring for and protecting our wild birds.

For as one reviewer stated: "If you are not yet a bird-lover, you will be after reading this book. Words in our Beak is so enchanting as it follows a little cardinal named, Cam, through the rooftops of NYC and beyond. Cam has so much to share from a bird's eye perspective, it was hard to put the book down. I became enveloped in Cam's world by imagining what it is like to live on a rooftop, choose the right flowers to eat, and listen to the world around in the most intimate, gentle and fascinating ways. Thank you, Cam! I hope to read ever more of your travels in the new year!"

Just as an aside: As of this posting, Father's Day will be here in less than one month's time and my suggestion is that you may want to consider giving these books to anyone that you know who happens to be a father or a grandfather. After all, Father's Day is for the birds as evidenced by the male cardinal (Mac who is Cam's husband) seen in the photograph below featuring him spending time with their youngest daughter (Peanut).