NOT SO FAST: #MaytheFourth is for the birds! 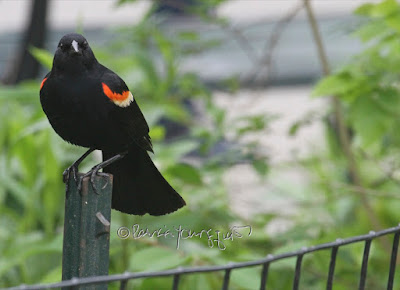 This past Saturday —  which was May the Fourth — here on Blogger, I reminded readers that it was World Naked Gardening Day, but in order to not scare the many people whose windows look out onto my rooftop garden, I didn't tend to it in the buff.

Additionally, I spent part of the afternoon out of garden and meandered about in Central Park in search of birds as May the Fourth is Bird Day and organizers of this event "suggest a field trip into a woods to look for and enjoy migrating birds."

Holiday Insights (HI), states this particular bird holiday always occurs on May the Fourth and it "is the oldest of the days set aside to recognize birds. According to the U.S. Library of Congress, Bird Day was first observed  on May 4, 1894. It was started by Charles Almanzo Babcock, superintendent of schools in Oil City, Pennsylvania. By 1910, Bird Day was widely celebrated, often in conjunction with Arbor Day. Bird Day and Arbor Day events are focused upon conservation training and awareness.

National Bird Day was established by bird activists. It calls upon people to recognize the plight of captive birds. It also draws attention to exploitation of birds in the U.S. pet industry. On this day, organizers suggest we reflect upon the conditions of birds held in captivity.

Note: Our research did not find any documentation that this is a "National" day, which requires an act of congress.

International Migratory Bird Day celebrates the incredible journey that migratory birds take each year. They travel thousands of miles between breeding grounds in North America, and their winter homes in Central and South America. Organizers say this is a day to both support, and to increase awareness of conservation efforts in support of migratory birds. They also suggest a field trip into a woods to look for and enjoy migrating birds."

While I was in the park, I came upon a Red-Winged Blackbird who can be seen in the photograph atop this entry as well as in the ones directly below. 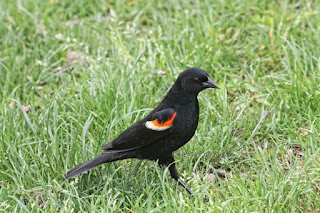 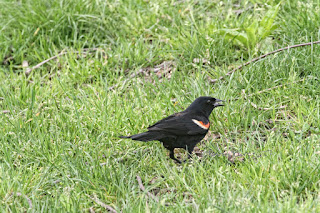 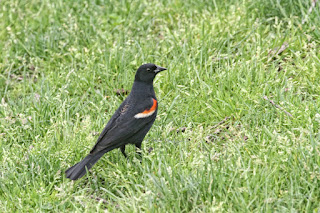 There were a number of people in the park who were not a mission to see birds rather, try were celebrating a holiday known as #MaytheFourth which was trending on social media.


It's believed that the phrase dates back to May 4, 1979, the day Thatcher took office as Prime Minister – and two years after the release of the first Star Wars film. Thatcher's political party placed a congratulatory ad in a London paper that read May the Fourth Be with You, Maggie.

One web-page stated this: "... Every year on May 4, Star Wars fans everywhere celebrate their love for the franchise by using a greeting straight from a galaxy far, far away: 'May the fourth be with you.'

And while the term is simply a play on words deriving from the one of the saga’s most famous phrases 'May the Force be with you,' it turns out, the Star Wars fandom weren’t the first ones to coin the popular saying.

Apparently, Star Wars fanatics have former British Prime Minister Margaret Thatcher to thank for the tradition. It’s believed that the phrase dates back to May 4, 1979, the day Thatcher took office as Prime Minister – and two years after the release of the first Star Wars film. Thatcher’s political party placed a congratulatory ad in a London paper that read 'May the Fourth Be with You, Maggie. Congratulations.'"
Posted by The Last Leaf Gardener