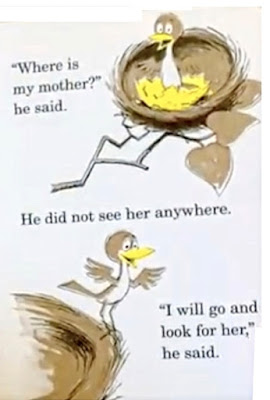 The image atop this entry is a screen shot of a page from one of my favorite books, Are You My Mother?, which is written and illustrated by P.D. Eastman. Eastman's book cover can seen in the next image (from a Wikipedia page). 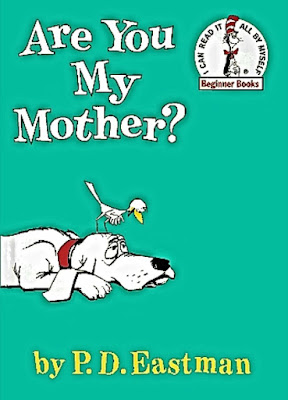 The aforementioned Wiki Page explains that Eastman's book tells the "the story about a hatchling bird. His mother, thinking her egg will stay in her nest where she left it, leaves her egg alone and flies off to find food. The baby bird hatches. He does not understand where his mother is so he goes to look for her. In his search, he asks a kitten, a hen, a dog, and a cow if they are his mother. They each say, 'No.'

"Then he (the little baby bird) sees an old car, which cannot be his mother for sure. In desperation, the hatchling calls out to a boat and a plane, and at last, convinced he has found his mother, he climbs onto the teeth of an enormous earth mover. A loud 'SNORT' belches from its exhaust stack, prompting the bird to utter the immortal line, 'You are not my mother! You are a SNORT!' But as it shudders and grinds into motion he cannot escape. 'I want my mother!' he shouts.

"But at this climactic moment, his fate is suddenly reversed. The earth mover drops him back in his nest just as his mother is returning home. The two are united, much to their delight, and the baby bird tells his mother about the adventure he had looking for her."

Eastman's story comes to mind on many occasions whenever I see a baby bird looking around and the other day when I was in Central Park and spotted a baby American robin doing this.

He/she can be seen in the next series of photographs and perhaps upon looking at them dear reader, you'll see why he/she reminded me of Eastman's book.


That was not my first encounter with a baby robin, for a few years ago, I had the good fortune to observe a baby robin in my rooftop garden.

The little creature is featured in the following pictures.


American robins are discussed in volume three of my book series, Words In Our Beak, where the stories are set in my rooftop garden and told from the perspective of a female cardinal who visits it and is featured on the covers of each book.


Just as an aside: As of this posting, Father's Day will be here in less than one month's time and my wisdom for this particular Wednesday to suggest that you may want to consider giving these books to anyone that you know who happens to be a father or a grandfather. After all, Father's Day is for the birds as evidenced by the male cardinal (Mac) seen in the photo below spending time with his daughter (Peanut).