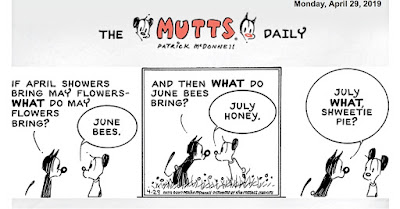 A copy of the Mutts comic strip that's posted atop this entry was in my In Box this morning causing me to recall a joke that I heard a few years ago:

Q: If an April shower brought a May flower; what did the May Flower bring?
A: Pilgrims!

But if truth be told, imho, April showers take away May flowers and I've mentioned my observation re this occurrence in prior posts here on Blogger. Welcome to the 124th segment of my Tuesday's Truths series...

NYC has been receiving heavy rains for several days now and many of the tulips in my garden that I wrote about in this past Tuesday's blog post (where I included photographs of them) have lost their petals.

An example of this can be seen in the following series image of my Red Riding Hood Tulip variety...


...which was flourishing as evidenced in the photos included in the aforementioned blog post and in te picture directly below.


Another one of my tulip varieties known as Day Dream (which is also featured in the blog post I've just referenced) has lost petals due to heavy rain. Images of this are in the following photos.


The same thing is happening to my Spring Green Tulips (a variety that is also discussed in the blog entry I've mentioned) which you can see in the next image.


But while these tulip types are now exiting (their full blooms were here less than a week); my Elegant Lady Tulips variety is entering. She is the pink flower seen in the next set of pictures.


The exiting of my Red Riding Hoods, Day Dreams and Spring Greens occurring simultaneously reminds me of a line in a Jacque's speech in Shakespeare's, As You Like It.

"...All the world’s a stage, And all the men and women merely players; They have their exits and their entrances..."

Tulips like Shakespeare's men and women seem to be merely players who are exiting and entrancing which is an observation I mentioned in a 2011 blog post!

But while they may be exiting my garden due to heavy rainfall; a number of tulip types have lived on through my blog posts as well as through volume one of my book series, Words In Our Beak, the stories are set in my garden and told from the perspective of a female cardinal, who is also the cover girl for all the books.

By the way, they make great gifts for Mother's Day which is coming up (May 12) soon!