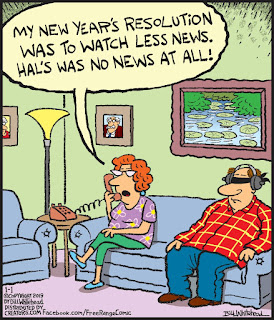 According to a web- page on Holiday Insights (HI) "If there's a day to celebrate New Years and to make resolutions for the upcoming year, then there should be a day to ditch those resolutions. That's the reason for today [January 17th]."

HI goes on to proclaim "If you haven't broken or given up all of those New Year's resolutions, you're doing better than most of us. Maybe, you're well along the way to accomplishing them. Maybe, a few are already checked off on your list. Good for you! For many of us, New Years resolutions are hanging heavily over our heads. They have become a burden, and perhaps were not such a good idea after all. Then...... of course, there's the New Years resolutions that have already been broken. If you haven't accomplished, broken, or given up your New Year's resolutions, today is your chance to get out from under them."

So in honor of this holiday, I've posted a comic strip of Dilbert as well as a cartoon by Bill Whitehead atop this entry as they "address" the making of New Years resolutions.

I guess ditching New Years resolutions won't be on my to-do list today because I didn't make any, which has been my standard for a number of years now. I confessed this in a 2011 blog post, where I stated, "It's not that I don't have resolutions to make: I have bills to pay, a temper to monitor, faith that feels watered down and it needs building up, and the habit of swearing that needs to be stopped immediately.

"All of these things are important to address, whether it is through a New Year's Resolution or offered up during Lent. As far as New Year's resolutions go, I am also certain that there are people in my life who would have a litany of things that they'd like me to resolve to change; but thankfully, we cannot impose New Year's resolutions for others, in spite of the sentiment raised in Dilbert (as seen in the comic strip posted above this entry). While it is true that if I kept a swear jar, and (if I had money to spare) put money in it each time I swore, I might have money to pay outstanding bills, giving up swearing, is not a resolution that I have been able to maintain.

"Were I to have given up swearing for the 2011 New Year, and then had subsequently stubbed my toe on the first day of this new year, and responded by swearing, I would feel panged by the breaking of this resolution. For the next 364 days, I might even berate myself for not keeping a promise — better to not have another reason to berate myself. Therefore, in my older age, I try and make New Year's resolutions that I can stick to and then work on the other things one day at a time."

But while this might be the holiday for ditching resolutions, it could be the day to start a new way of thinking. Last Thursday afternoon I was walking through Central Park to get to a doctor's appointment on the Eastside and had hoped to take photographs of birds as well as squirrels while en-route.

But alas, I forgot to put the battery back in my camera after charging it last night.
So... I used the opportunity to ponder a question that someone asked me this past Sunday which was, "What are your goals for the new year?"

The question threw me off guard and I replied by saying a goal was to come out of a financial crisis I've been in for a while now (as a result of medical circumstances).

I also told him my goals were to have Words In Our Beak (seen in the image below) placed in more stores and to book more speaking presentations re the parallels of humans and avian behavior.


BUT walking through the park without the help of a camera to focus on the many birds as well as other animals around me, I focused on my answer to the goal question and realized that by making it a goal to sell more copies of Words In Our Beak and/or to procure more speaking assignments, I was setting myself up for disappointment because selling books and securing presentations is not in my control, so I can't set those as goals!

I can, as I've done in the past, do all that is in my power to make my endeavors happen, but then I need to let go of the result, which is a mindset or goal that is in my control.

I realized my goals need to be rooted on what is possible for me to do: drink more water, swear less often (or at least cut down on it), stop reaching out to people who do not have my best interest at heart... etc; and most of all have a mindset of being more grateful.

Keeping a gratitude journal is one way I may do that for I recently read (in a web-page for Canadian Living), "the importance of getting in a habit of being grateful for every good thing that comes to you, and to give thanks continuously. And because all things have contributed to your advancement, you should include all things in your gratitude (which is from a quotation that attributes it to Ralph Waldo Emerson)."

The author confesses, "I'm not much of a resolutionist. In fact, over the past few years, I haven't made any resolutions for the new year at all. It's not that I'm against them, but rather because I'm no good at sticking to any of them. Something always happens -- whether by way of life or by me -- that puts me off course, and then I look back, half way into the new year, feeling disappointed that I wasn't able to stick to the plan."

And she says, "One thing that I do on the cusp of every new year, however, is write down all the things that I can remember from the previous year that have made me grateful. They can be big things like trips overseas and professional advancements, but I also try to focus on the little things that made me happy, like peaceful conversations with my mother, shared over a cup of tea, and serene walks on my own through nature. In fact, I always carry a book in my bag, and often make time to write in it. The current one I'm carrying around is a gift from a friend. She gave it to me on my birthday with a note that said, 'For the times you'd like to disconnect and refocus.'"

Now that we are seventeen days into this new year, celebrating the holiday of ditching new years resolutions, it's time for me to mention that I have designed covers for spiral notebooks which can be used as gratitude journals.

Some are rendered in the likeness of the now famous Mandarin duck in Central Park, others are based on my kaleidoscopic photographs. Examples are featured in the following pictures.

Replacing ditched new years resolutions with by documenting thoughts of gratitude — not a bad idea for spending the remaining 348 days of 2019!
-----