Frankenstein Must Share His 2018 Holiday! (National Pumpkin is also today.) 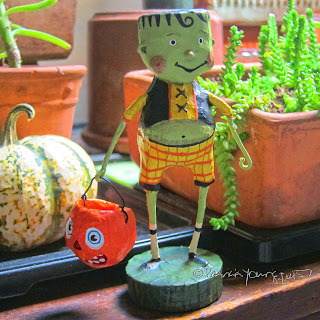 Today is the last Friday in the month of October, which means it's Frankenstein Friday, and if you'd like to see what I said about this holiday in last year's post here on Blogger, please click this link.

This year, as a way of honoring of this occasion, I'm posting a picture of a figurine rendered in the likeness of Frankenstein.

This picture was taken in bygone years when he spent time in my indoor succulent garden.

In subsequent years after that Frankenstein and his bride (seen in solo photo-ops below) went to a vow renewal ceremony that took place in my armoire! 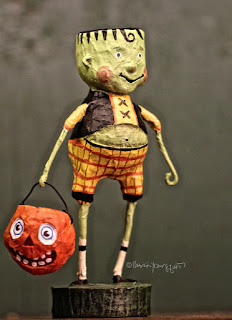 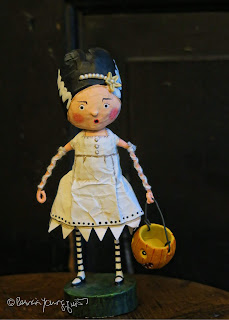 Because this year's Frankenstein Friday falls on October 26th, it coincides with another holiday, which is National Pumpkin Day, a favorite of the characters from the PEANUTS comic strip, as evidenced below in an image from a webpage known for BIOLOGICAL.


According to the aforementioned webpage, "The pumpkin is a cultivar of a squash plant native to North America. As one of the most popular crops in the United States, 1.5 billion pounds of pumpkins are produced each year...  Illinois is one of the top pumpkin producing states with 95% of the U.S. crop intended for processing is grown in Illinois. Nestlé, operating under the brand name Libby’s, produces 85% of the processed pumpkin in the United States, at their plant in Morton, Illinois."

This year in my research re National Pumpkin Day, I studied the relationship of Jack-O-Lanterns and pumpkins and I learned some interesting facts!

The author of the article, I've just quoted is Matt Soniak and he goes on to say, "The term 'jack-o'-lantern' was first applied to people, not pumpkins. As far back as 1663, the term meant a man with a lantern, or a night watchman. Just a decade or so later, it began to be used to refer to the mysterious lights sometimes seen at night over bogs, swamps, and marshes..." Read the rest of his interesting article by clicking here.

As for Jack-O-Lanterns and yours truly, one, of them who spent time in my rooftop garden seemed over-joyed upon seeing house finches that I was inspired to design a Halloween card featuring a Jack and house finches. A picture of it is featured below.


This card along with other styles of dome of my general greeting cards is available via my pages on Fine Art America @ http://bit.ly/2s1ajZF  Additionally, Jack-O-Lanterns are featured in volume two of my Words In Our Beak book series, as evidenced in the next two pictures.

Please click here to go to my blog post that provides details as to where you can get these books. Additionally,  I have rendered some images from these books into other formats and they are available via Fine Art America (FAA). Some of my other photographs (Black & White Collection, Kaleidoscopic Images and the famous Mandarin duck who visited NYC) can also be found on my FAA pages.
Posted by The Last Leaf Gardener