Monday's Musings: It's not just for the birds, raccoons also do people-ing. 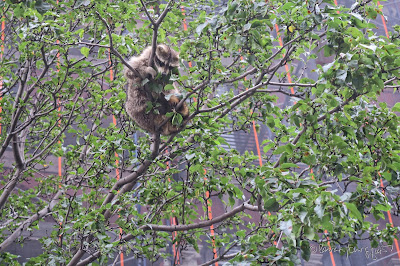 Yesterday I reported on TLLG's Facebook Page, the following: when I was walking up Columbus Avenue, heading towards the greenmarket and green-flea on the UWS, there was a large raccoon who was doing some people-ing from a treetop near to some scaffolding; as evidenced in the picture atop this entry, where the creature can be seen seen "spying" on all who happened to pass by.

"People-ing," as those who have read volumes one and/or two of my book series, Words In Our Beak..


... is the term used by Cam (the female cardinal who tells the stories in these book) to describe what birds call the term they use when watching people.

Cam continues to point out other stories re birds and their action of people-ing in the third and final volume of her series...


...which is expected to be available earlier October.

However, as the raccoon whom I encountered yesterday truly shows, members of the avian community are not the only ones in the animal kingdom known to people watch or do people-ing

Moreover, this particular raccoon seemed unimpressed by anyone he/she saw passing by, as you might surmise from the next picture. 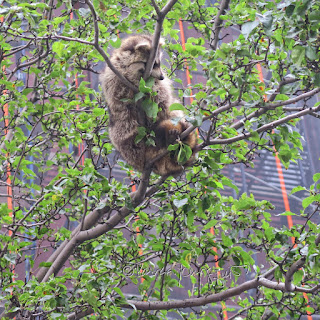 But rather this raccoon was moved by the people he/she observed; many were moved by him/her and were quick to take photos with their cell phones (which I don't have) and or their "traditional" camera (as was the case with me).


As I mentioned in the beginning of this entry, yesterday on my way to a greenmarket (located on the UWS), I noticed (as did many others) that a raccoon was looking down on all who passed by. The police had been called and they were in their car parked nearby, presumably waiting for an animal rescuer. I had hoped to find out the fate of the creature while on my way back from the market, but I was there much longer than I expected and by the time I returned the police were gone and so was the raccoon. I have since read an article about the incident, but the writer (Kate Koza) was not able to find out about the creature's fate; but like the writer of the article, I am concerned for the raccoon.

Another person who seems to be taken by raccoons is the poet, Mary Oliver, whose poems I have referenced in a number of entries here on Blogger.

I'll leave you for today with what Oliver had to say (bolded text) in her poetry re raccoons:

Night after night
they travel toward dampness,
the stones of the river,
the silky ponds,
and spread a text
over the banks of sand
shelving to water…all night
they wander through lilies
and weeds, meander
the black rims
of the midsummer flow…
then vanish at dawn, climbing
upland through brambles and into
the secret trees.

Oh when the night wind wakes
and the white moon
flies up through the thickets,
i imagine them walking,
silvery, slumberous,
each a sharp set of teeth,
each a gray dreamer, prowling
over the sands, arranging,
night after summer night,
the myths of the morning.