Another View From The Bridge (Oak Bridge): Tuesday's Truths Wk 91 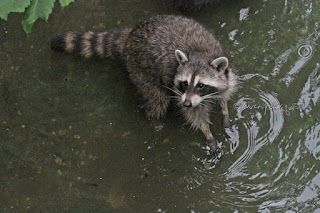 Welcome to the ninety-first segment of my Tuesday's Truths series! As you can see, I'm featuring a picture of a raccoon atop this entry. I came across this creature when I was crossing Oak Bridge (a bridge that I've featured in a prior post here on Blogger), which is located in NYC's magnificent Central Park.  A web-page has this to say re Oak Bridge:

"Back in 1860 when Calvert Vaux and Frederic Law Olmstead gave the world Central Park, one key element at the northern end of the Lake was Oak Bridge, a span constructed of white oak and cast iron leading into the Ramble. That bridge has since been replaced twice, first with another fancy one in the 1870s (when it was renamed the Bank Rock Bridge), and then again in the lean years of the Great Depression by a utilitarian model in tubular steel with a wood plank floor. Now the original Vaux design, re-imagined by Jan Herd Pokorny Associates, is being reconstructed. Again we get carved white oak and cast iron, but now it all sits atop a very substantial base that should last for generations..."

I've also read (in a variety of of newspapers and on the web) that "if you're lucky you might catch a glimpse of the baby raccoons or the giant snapping turtle."

So, I guess you could say I was lucky in encountering this raccoon, who was one among many swimming amongst turtles (one can be seen in the image directly below where he/she is taking a swim near the lower right of a raccoon) in this body of water. 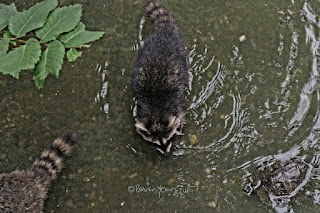 And although some might consider me lucky to come upon these raccoons, these creatures have not been so lucky in this summer of 2018.

According to a number of sources, including an article in the New York Post, "nearly 70 Central Park raccoons have perished since the dawn of a 'zombie' virus outbreak."

This article states "...  more live raccoons showing signs of canine distemper virus, a fatal illness that can’t affect humans but may spread to unvaccinated dogs, were picked up by park rangers.... Before that, 67 dead or sick raccoons believed to have been infected with the virus that makes them act like 'zombies,' the Parks Department said... All sick raccoons found alive during the outbreak are humanely euthanized..."

The raccoons I'm featuring in this postings are ones (as I've stated earlier) are ones that I came upon in August, so since they appear to have survived the outbreak of distemper which occurred in June, I hope they are and will continue to be unaffected. 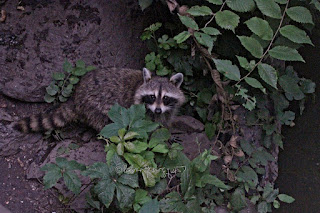 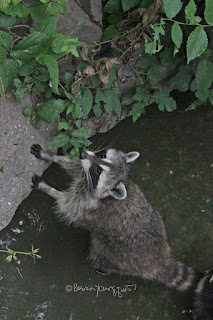 Fyi, this condition negatively impacts on all wildlife but not human beings, but the aforementioned article also states: "Distemper spreads when raccoons, dogs and other animals make contact with infected saliva, urine, feces or respiratory discharge. Most dogs are vaccinated for the virus, though the city only requires distemper immunization if pups are headed to a boarding or grooming facility."
Posted by The Last Leaf Gardener