Wednesday's Wisdom: Listen to the Birds! 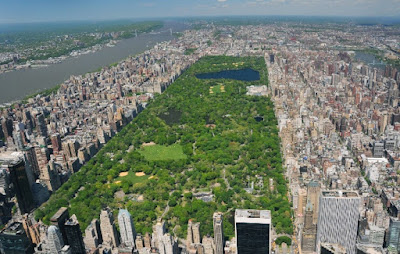 I live near to Central Park, which can be seen in the photograph (from a web-page) atop this entry.

During the dozens upon dozens of years in my travels to work places or medical facilities, I have gone to and from my destinations by walking on several different paths within the park. Yet, it is only over the past couple of years, that I’ve heard any of the numerous birds who visit there, in the act of singing.


I am certain that they haven't just started to do this, and when I told my friend about hearing them at long last, he said I reminded him of Marian Paroo, a character in The Music Man, who, after meeting Harold Hill (another character in the story), sang these lyrics:

As for my recently noticing the birds’ singing, I don’t attribute it to anyone like Harold Hill, rather, I attribute it to Cam, a female cardinal, who now visits my rooftop garden on a regular basis and whose singing is one of the topics I discussed in this past Monday's entry here on Blogger.

In part of that entry I stated, "The presence of birds in my place was brought to my attention by my gardening comrade, Juan V who was working in my garden when he happened to discover a hummingbird... " and he "predicted" that if I put out something for birds to eat, I’d probably have some avian visitors. I also explained that "soon after I took his advice, a female cardinal (who I ultimately named Cam) starting coming to my garden and I could detect where she was by the songs that came out of her beak. I couldn’t necessarily always see her, but being visually challenged has its benefits: I could hear her from far away and follow her sound with a very long camera lens that served as my eyes."

It was my hearing Cam and a few other birds who have spent time in my rooftop garden, including her daughter, Frannie, as well as an American Robin and a House Sparrow (who are featured respectively in the following images) sing.


Listening to them caused me to be more aware of other birds in the act of singing.

I even heard a blue jay burst into song while alighting on the branches of an Ailanthus Tree that's in my courtyard (as seen below).


Hearing Cam and other birds singing in either my rooftop garden, or from within the Ailanthus trees in the courtyard, has changed my experience of walking in Central Park.

Now, no matter how preoccupied I am with my thoughts, or by what sounds I hear (from sirens or from folks playing loud music on their devices or on their particular musical instrument) while I walk in the park, I always hear birds singing. Therefore, my Wednesday's Wisdom (WW) is this, dear reader, if you have not already done so, try listening to birds singing the next time you walk in any park.

As for me, today I'm going to have to heed my wisdom and make an extra effort to listen to the birds sing —  instead of listening to my anxieties — as I walk through the park on way to the surgical procedure which I discussed in yesterday's blog entry.

ADENMENDUM ONE: I'm thankful to report round one (today's procedure) re the growth under my eye lid is over... It is off my eye lid and is being sent to a lab to see if it is benign or malignant; and also to see if it is neurofibroma or another type of growth. 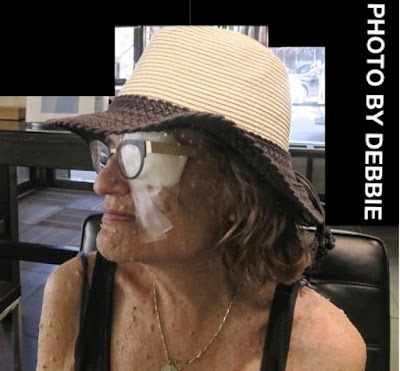 ADENMENDUM TWO: I am thrilled to report that the results of my growth have finally came back from the lab.  It seems what I had was a Hidrocystoma, which was benign and unrelated to NF. I hope it is an isolated incident. Now I will prepare to have my secondary cataract, which is in my left eye removed in June.
Posted by The Last Leaf Gardener