The Inaugural Event at THERE 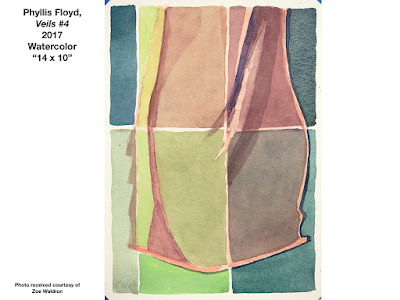 This past Friday, May 25th, I attended "the inaugural event at THERE" which took place in NYC. At the event I saw the painting featured in the image atop this entry. The piece is titled Veils #4, and was created by Phyllis Floyd, one of the founders of an association named Zeuxis.

One of the reasons Floyd's art association fascinates me is its name. I've always been interested in the painter, Zeuxis, who flourished during the fifth century BC. Of the many "stories" associated with this artist, I think this is my favorite:

"According to the Naturalis Historia of Pliny the Elder, Zeuxis and his contemporary Parrhasius (of Ephesus and later Athens) staged a contest to determine the greater artist. When Zeuxis unveiled his painting of grapes, they appeared so real that birds flew down to peck at them. But when Parrhasius, whose painting was concealed behind a curtain, asked Zeuxis to pull aside that curtain, the curtain itself turned out to be a painted illusion. Parrhasius won, and Zeuxis said, 'I have deceived the birds, but Parrhasius has deceived Zeuxis.' This story was commonly referred to in 18th- and 19th-century art theory to promote spatial illusion in painting. A similar anecdote says that Zeuxis once drew a boy holding grapes, and when birds, once again, tried to peck them, he was extremely displeased, stating that he must have painted the boy with less skill, since the birds would have feared to approach otherwise."

I've never asked Phyllis Floyd if the name of her art association had anything to do with the fifth century painter, nor did I ask her if her painting, Drawing the Curtain #10, that is included in the exhibition (and can be seen below) was influenced by Zeuxis's (the painter) curtain experience. 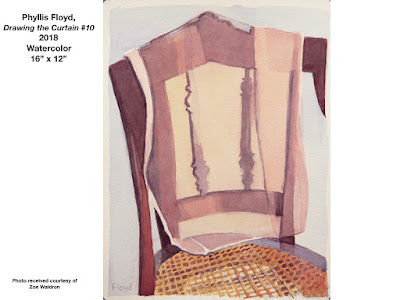 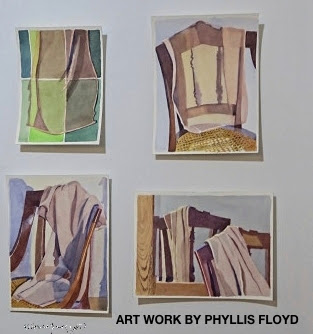 Admittedly, my images do not reflect the colors of Floyd's work as I took them with a "pocket" camera, but am including them here to give you a sense of how they look in the exhibition. I highly encourage you to go to the exhibit so that you can see Floyd's works with your own eyes, not through the lenses of any of the images included here. In the meantime, I'd like to share a few of the other works of art that I saw at last Friday's inaugural event.

The two pieces (as they appear in the exhibition) seen in the next image are by Nancy McCarthy. 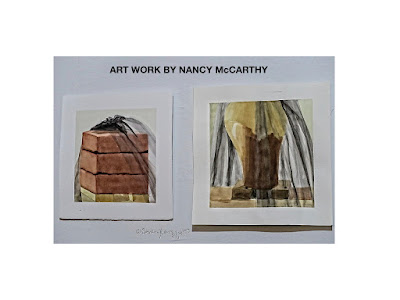 But as with Floyd's work, I took the photographs with a "pocket" camera, and am only including them here to give you a sense of their appearance in the exhibition. The following pictures can give you a better sense of McCarthy's paintings. 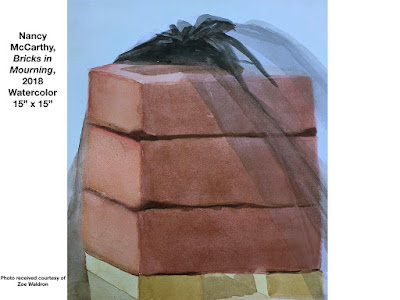 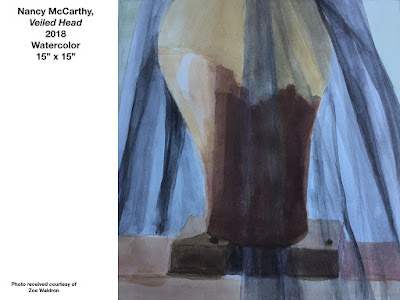 Other artists included in the exhibition are as follows:

Mahnick's piece as it appears in the exhibition can be seen below. She and I spoke re how a small sized art piece commands the viewer to come closer to take a better look. 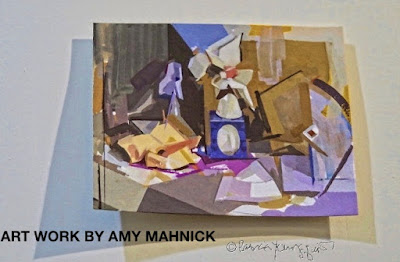 Since I took the photograph of Mahnick's piece with my "pocket" camera, I have not given justice to it as the case with the pictures I took of Floyd and McCarthy's paintings (which I mentioned earlier).

But fear not, dear reader, all the artworks that were on view this past weekend can also be seen this Saturday and Sunday (June 2+3) from 12-6PM, as stated within the link I provided in the first paragraph, posted here again for your convenience.
Posted by The Last Leaf Gardener