WW:* Don't Go Near the Nests of Geese (*Wednesday's Wisdom/Warning) 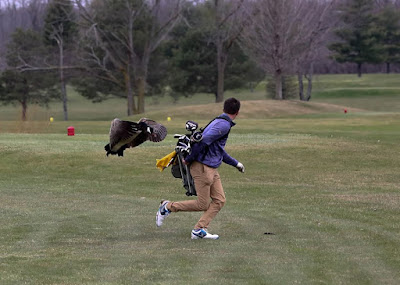 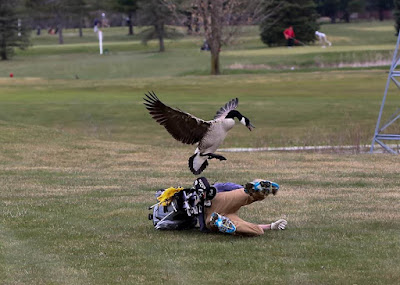 I learned through my newsfeed (yesterday) that "Isaac Couling, 16, was attacked by two birds while he was competing in a tournament at Wolf Creek Golf Course, in Adrian, Michigan, on Saturday."

The news of the incident was reported by multiple news sources, including Metro, where the photos atop this blog entry were included.

II was not surprised by this report, for in my research re Canadian Geese, I've learned they have been known to attack humans when they believed that their nests were in danger.

Evidently, Couling was near to a nest of geese when golfing.

Be that as it may, both genders of this bird type participate in the parenting of their goslings and are very protective of their young creatures.

This is evidenced by the next image (taken in Central Park).


The aforementioned image is included (along with a number of other pictures that feature geese and goslings) in volume two of the Words In Our Beak series.


And by the way, to avoid the calamity of Isaac Couling, make sure you stay far away from the nests of geese! Also, let them eat in peace. Better a goose or a gander have a chunk of food in their beaks rather than a chunk of you!