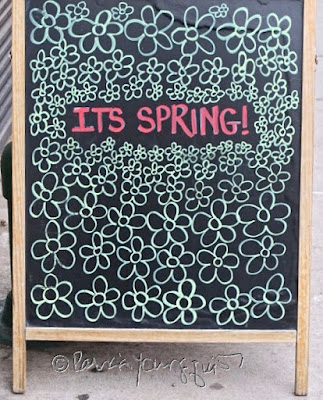 Fake news (IT'S SPRING!) seems to be posted on a chalkboard outside a bike shop near the West Village, for we are not having spring-like conditions here in NYC!

As I write this post it's thirty-six degrees and windy with a rainfall on the way!

I've often said, "April Showers take AWAY May flowers," and I am now wary of the fate of my tulips, which I wrote about in this past Tuesday's blog post.

In any event, I came across this chalkboard message when I stopped by a bike shop to pick up a replacement CamelBak that was given to me. I have to use a CamelBak to keep me hydrated when I cycle, and last night was the first time that my captain and I have cycled since September 20th, 2017!

Our ride was very chilly and I had not checked the status of my camera so I didn't realize the battery was too low for picture taking.

Therefore, I couldn't document it pictorially, but baby, it was COLD outside (and I'm saying this after having done rides in January and December, but I was dressed for those, I certainly got it wrong in dressing for last night's ride)!
Posted by The Last Leaf Gardener