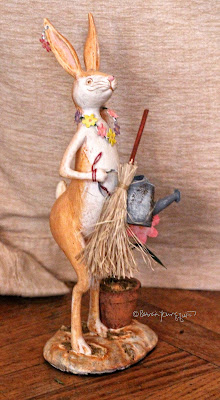 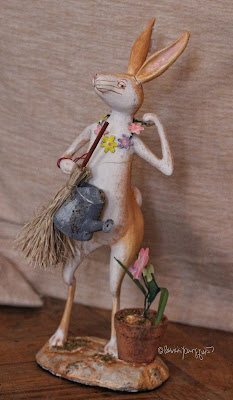 In the country of Poland, the Monday after Easter is known as Dyngus Day, which is also spelled Dingus Day. A web-page within Holiday Insights (HI) describes this occasion as "a fun Polish Holiday (and explains that )"it is very popular in Poland, and in Polish communities across America. After the long Lenten holiday, Dyngus Day is a day of fun. And, perhaps a little romantic fun. It is always celebrated on the Monday after Easter."


HI goes on to state that "when exploring the roots of Dyngus Day, Historians point to the baptism of Polish Prince Mieszko I in 966 A.D. Baptism with water signifies cleansing, fertility, and purification."

New York's city of Buffalo, is considered to be the Dyngus Day Capital of the world. Here's what a page on a web-site associated with festivities which occur there on this holiday has to say:

Historically a Polish-American tradition, Dyngus Day celebrates the end of the often restrictive observance of lent and the joy of Easter. Over the decades, Dyngus Day has become a wonderful holiday to celebrate Polish-American culture, heritage and traditions. There are many stories that attempt to explain the origins of the day. Many Polish customs date back to pre-Christian, Slavic practices. The custom of pouring water is an ancient spring rite of cleansing, purification, and fertility. The same is true of the complimentary practice of switching with pussy willow branches. Since 966 A.D., Dyngus Day has been associated with the baptism of Prince Mieszko I. Tradition states that Prince Mieszko I along with his court were baptized on Easter Monday. Thus, Dyngus Day and its rites of sprinkling with water have become a folk celebration in thanksgiving for the fact that the first king of Poland was baptized into Christianity, bringing Catholicism to Poland. In more modern times, the tradition continued when farm boys in Poland wanted to attract notice from the girls of their choice. It was customary to throw water and hit the girls on their legs with twigs or pussywillows. Cologne was used instead of water by the more gallant lads. The ladies would reciprocate by throwing dishes & crockery and Tuesday was their day of revenge, imitating the same tactics.

I decided to post the two images of the figurine that are atop this entry in honor of the Polish Dyngus Day tradition of one playfully throwing water on someone on the day after Easter. And I'm including the background info re this holiday in honor of my longtime friend, Marilya (Maria) Sitarska who can be seen in the picture directly below. 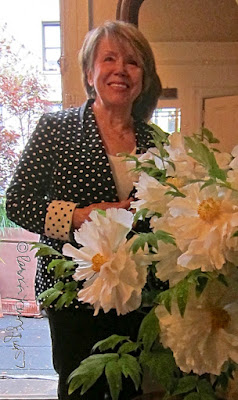 The photograph was taken in my home during the first part of month of May in 2014. I had brought my Paeonia suffruiticosa (Tree Peony) inside my home (from my rooftop garden) because it had just bloomed; and severe storms were predicted which would have caused all the flowers to fall off!

In any event, my Paeonia suffruiticosa is featured in volume one of Cam, my female cardinal's book series, Words In Our Beak.


But getting back to Marilya: She grew up in Warsaw, but has been living in NYC for quite a number of years, and I've known her for a long time. I'm thankful to say (as is Cam) that she has been a big supporter of the Words In Our Beak book series. And on that note Cam and I wish her as well as her Polish comrades a blessed Dyngus Day.

But if they live in NYC, I'm not sure if any of them will be participating in outdoor fanfares where they douse each other in water, for it is snowing heavily (as evidenced by the image of my garden that's posted directly below) on this Monday after Easter, which also happens to be the first Monday in April!