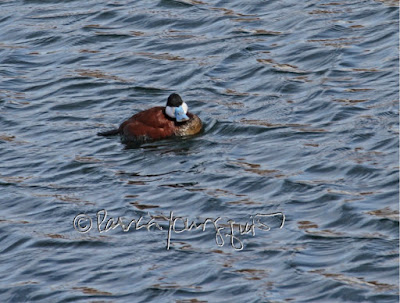 It is now the eve of Earth Day for 2018 and as I write this post, it's at a much later hour than is my standard in terms of entries published here on Blogger. This is because I spent most of the day taking advantage of the one of the first full spring like day that we've had here in NYC.

I started with a walk along the Greenway that runs parallel to the Hudson River where I encountered many beautiful sites related to flora and fauna, which I hope to discuss in tomorrow's post in honor of Earth Day.

As for today and my walk along the greenway, I exited it at 104th street in order to head east so I could also walk in Central Park.

While I was there, I came upon my ninth new bird citing in this Year of the Bird and he can be seen in the image atop this entry, where he is swimming in the Jacqueline Kennedy Onassis Reservoir.

It turns out that this bird is a male Ruddy Duck. According to The Cornell Lab of Ornithology, "Male Ruddy Ducks have blackish caps that contrast with bright white cheeks. In summer, they have rich chestnut bodies with bright blue bills."

He was pretty far away from me and even with a long camera lens, the photo atop this entry, and the ones directly below, are the best I could do!

But all of them will give you an idea of his characteristics, as described by Cornell: blackish caps that contrast with bright white cheeks. In summer, they have rich chestnut bodies with bright blue bills." 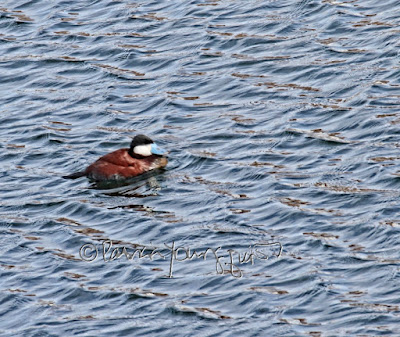 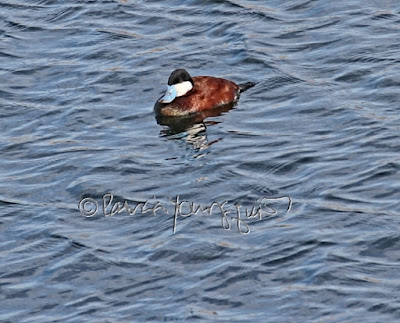 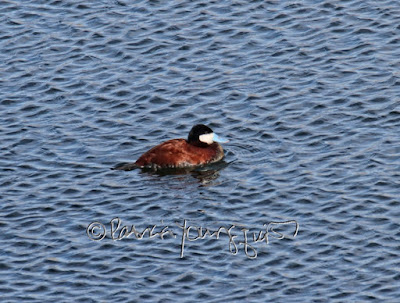 What a nice experience it was to meet this new guy on Earth Day Eve, and as I said earlier dear reader, I came upon other beautiful aspects of the beauty of the earth, which I plan to discuss in tomorrow's post. Stay tuned!
Posted by The Last Leaf Gardener