Here's Tuesday's Truths for the 71st Week: This is The Year of the Bird 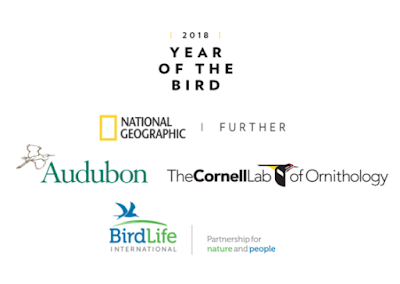 In honor of the sixteenth day, of the one-hundredth anniversary of The Migratory Bird Act, I am posting a reminder: This calendar year of 2018 has been designated as The Year of the Bird.

The collage atop this entry depicts the fact that The Cornell Lab of Ornithology is partnering with organizations that include National Geographic, National Audubon Society, Bird Life International, and, is "asking people to pledge to do one thing per month to help birds."

Readers of this blog surely know, I enjoy any opportunity to take care of birds, which I mostly do for the array of types who have visited my urban garden.

They include (in alphabetical order), a lone American Goldfinch;


a number of American Robins (one of them can be seen in the next picture);


a number of blue jays (three are featured in the following image):


a few cardinals (two of them are featured in the photo below);


an occasional chickadee (one of them is featured in the following picture);


several Common Grackles (one of them is featured in the next image);


a number of dark-eyed juncoes (one of them is featured in the photo below);

a few downy woodpeckers (one of them is featured in the following picture);


dozens of European starlings (two are featured in the picture directly below);


several house finches (two are featured in the next image);


dozens upon dozens of house sparrows (a few of them are featured in the following picture);


a lone leucistic house finch (he/she is featured in the next photo);


dozens, upon dozens, of mourning doves (two are featured in the following image);

a few Northern mockingbirds (one is featured in the next photo);

lots, and lots, of an array of pigeons types (two like-types are featured in the following picture);

as well as an occasional White-breasted nuthatch (one can be seen in the photograph below);

Another thing that I've done for the avian community, is to help a female cardinal, Cam, whose been a regular visitor to my garden (and is pictured below), to write a book.


Cam is a spokes-bird for the avian community, and it was my pleasure to help her tell her story, which aims to raise awareness re the plight of urban birds. The book, as regular readers of this blog know by now, is titled Words In Our Beak Volume One.

WORDS IN OUR BEAK is the first volume in a series of narratives introducing readers to a simple understanding of the winged world and its environment. Set in a New York City rooftop garden, the story is told in the voice of Cam, a female cardinal, who visits the garden regularly.

Written for children and adults who are curious about birds and want to learn about them from a unique perspective, WORDS IN OUR BEAK includes rich, colorful images of Cam and her friends surrounded by lush flora and fauna. Also woven within this amusing and informative narrative are references to additional text and video expanding the reader’s experience.

Hopefully, Cam's book will raise awareness re the avian community. As I mentioned in a prior post, one reviewer of the book has this to say:

"If you are not yet a bird-lover, you will be after reading this book. Words in our Beak is so enchanting as it follows a little cardinal named, Cam, through the rooftops of NYC and beyond. Cam has so much to share from a bird's eye perspective, it was hard to put the book down. I became enveloped in Cam's world by imagining what it is like to live on a rooftop, choose the right flowers to eat, and listen to the world around in the most intimate, gentle and fascinating ways. Thank you, Cam! I hope to read ever more of your travels in the new year!"

Here's the info on how to buy all the versions of the book.

Yet another thing I've done, to help birds, is to rescue three different pigeons who were visiting my place, when I noticed that they needed medical attention. Please click here, as well as here, and here, to see photos of the rescued pigeons, and to read about these birds, and to learn about the places who gave them medical attention.

I also participated in the rescue of a Northern Flicker, who injured him/herself on the premises of a building that is a few doors west of where I live. Please click here to see the list of posting which discuss his injury and the places that tried to care for him.

Another action that I have taken to help the well being of an array of wild birds outside my garden was to participate in a Costal Clean-Up initiative (sponsored by Audubon in 2017), in an effort to help bird types known as the American Oystercatcher as well as Canadian Geese who visit Jamaica Bay near the North Channel Bridge.

I hope that in #ThisYearoftheBird, I'm able to do much more. I also hope that Cam's book is read by many, and that in doing so, her readers are inspired to do more for the avian community.

Hardcover versions of volume one, two and three can be found wherever books are sold.