As of now, Verizon has fixed the Internet snafus that have been occurring, so, I'm back to my posting here on Blogger, and I'm just in time for week seventy-one of my Tuesday's Truths series.

I come to it with this thought: a well known pop song, Rainy Days and Mondays, which was sung by the late Karen Carpenter is on my mind, because yesterday was a very dreary Monday in NYC.

Part of the lyrics in Carpenter's song state, "... Hangin' around Nothin' to do but frown. Rainy days and Mondays always get me down..."

While it wasn't rainy in NYC yesterday, it certainly was dreary (and still is today), but I couldn't afford to let dreary days and Mondays get me down, or let any day get me down for that matter; and that is this  truth for my seventy-first posting in this series!

Fortunately for me, yesterday there was much more to do than frown, even though I identified with the other lyrics in the song that proclaim, "Talkin' to myself and feelin' old. Sometimes I'd like to quit. Nothin' ever seems to fit..."

However, instead of "talkin' to myself and feelin' old," and giving into feelings that I'd like to quit, because "Nothin' ever seems to fit...," I went to a neighbor's home to take aerial views of how my rooftop garden looks now that Juan V and I winterized it this past Thursday. As you may recall, dear reader, Juan V has been taking aerial views of my urban garden since 2010, but this past October, we agreed the rooftop of the building where I live was a little too rickety to be used as a platform from which to take photographs.

Therefore, I've sought out other means of capturing an aerial view of my place, and one such vantage point is from the secure rooftop of a high-end building near to me. The owners were very gracious about my doing this and today was the first time I took them up on their offer. One of my photographs  can be seen atop this blog entry.

Another one, which is quite similar, can be seen in the next image, where squares as well as arrows have been added to my picture. They indicating how Juan V winterized my garden. 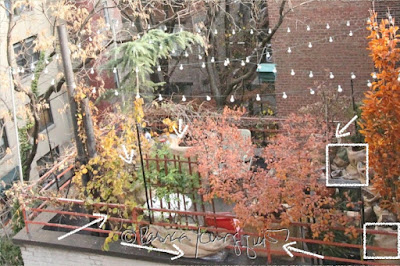 If you have followed this blog with any regularity, then you may recall that once a year before the onset of winter, Juan V and I wrap each one of my containers in bubble wrap and place a layer of burlap over that before tying it with jute.

Our winterizing method has been featured in two of my garden-themed movies that can be found within my Vimeo channel. These include The Kiwi Speaks! Fifteen Minutes of Fame...almost as well as It's a Wrap! Bubble Wrap!

In any event this year we wrapped over thirty containers of flora and moved a number of them into a "huddle" near to the wall of the building where I live. This is indicated within the square at the top of my image. They can be seen in close-up format in the next two photographs. 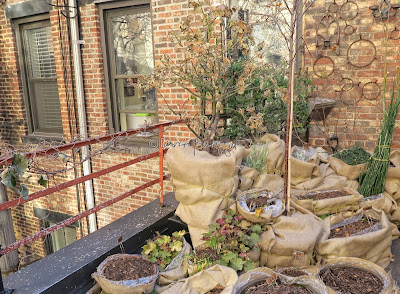 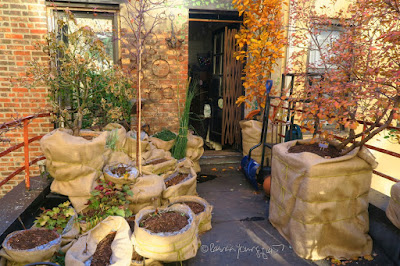 Meanwhile, the arrow behind that square (in the second image of this entry) is referencing my Truths, Words In Our Beak, 'Tamukeyama' (AKA Japanese Maple). A tiny arrow to the left of the one I've just discussed is referencing the wrapped container housing my kiwi vines. The smaller arrow as you "turn the corner" from there is my H.F. Young Clematis. 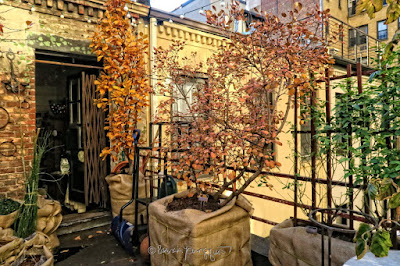 In any event, getting back to the second image of this posting, the little square in the far right hand corner indicates the wrapped container of my Fagus sylvatica (Beech Tree).

In terms of this year's fall foliage, my Beech Tree was a late bloomer, and she is still sporting her fabulous colors as seen below. 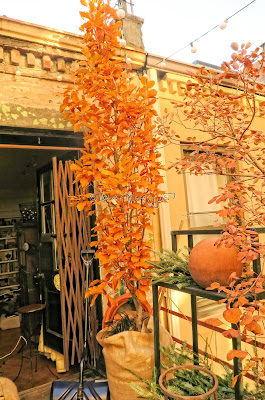 The subject of my urban garden winterizing was touched on ever so briefly in all of the versions of Words In Our Beak Volume One.


However, in volume two, the process and benefits of garden winterizing will be more detailed. This second volume should be available in late February/early March. It has been written, but needs to be formatted by Chris Deatherage, who designed my elegant website, patriciayoungquist.com and who formatted volume one.

Stay tuned for details! And, meanwhile, dear reader, try not to let rainy (or dreary) days and Mondays (or any day) get you down...