Cardinals and the celebration of Christmas 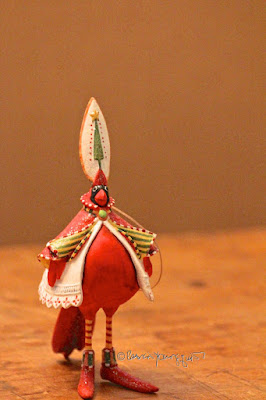 In eight days time it will be Christmas day. During this holiday, the likeness of male Northern cardinals are often seen in images on an array of items such as greeting cards, serving dishes, gift wrap, napkins, guest towels, kitchen towels, potholders, — the list seems endless.

Moreover, this bird type's likeness has been rendered into holiday brooches, Christmas tree ornaments and figurines. An example of the latter is featured in the image atop this entry.

I have read many articles and social media posts on the connection between the Northern cardinal and the Christmas holiday, including a blog entry by Karen Harvey Cox that states (re the coloring of a male Northern cardinal), the "bright red to remind us of Christ during the dreary gray days of winter ahead."

In her post, Cox also includes a quotation that proclaims:"Christened the Christmas bird for its spectacular red color, the cardinal has become a symbol of the beauty and warmth of the holiday season. A glimpse of this brilliant bird brings cheer, hope and inspiration on a gray, wintry day. As nature's reminder for us to focus on our faith, the cardinal's scarlet plumage represents the blood of Christ shed for the redemption of mankind."

The description is similar to what many writers state about the male Northern cardinal's association with Christmas, but I find it limiting. This is because thoughts like this only apply to those who live in parts of the world where Christmas occurs during a dreary winter season. In a number of places, Christmas is occurring during summer time, where folks might not be dreaming of a white Christmas with every Christmas card they write.

Be that as it may, the male cardinal is associated with Christmas and his likeness is rendered into an array of merchandize as I have described. This fact is one of the things that ruffles the feathers (as evidenced in the images below) of Cam, the female cardinal who visits my urban garden in NYC.


In her book, Words In Our Beak Volume One, Cam states: "I have been known to sing to raise awareness for certain causes; perhaps this is because as a female cardinal, folks often dismiss me due to my so-called 'dull coloring' and focus on the bright red males, even choosing their likeness to create figurines and stuffed animals. I've never seen either of these things rendered in the likeness of a female cardinal’s image, which I think is discriminatory!"

Christmas and cardinals is a topic that Cam touches on ever so briefly in her narrative but her book still makes an excellent gift for the holiday. I've posted an image of each version of Words In Our Beak Volume One below. If you click on the link below anyone of them, you will be led to purchase info.

Any version of her book so make a great gift for a non-holiday too, please read her press release (by clicking here) for more details.

The digital versions of Volume One within the Words In Our Beak book series that are mentioned in this entry may only remain available for a limited time, but hardcover versions of volume one, two and three can now be found wherever books are sold.