Monday's Musings: Is it titmice or titmouses? That is the question! 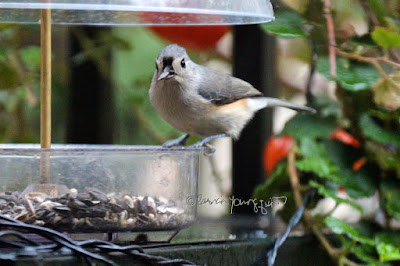 The little bird featured in the photograph that's atop this entry is known as a Baeolophus bicolor AKA Tufted Titmouse. He/she is enjoying black-oil sunflower seeds from an umbrella style bird feeder that's atop an urban hedge in my rooftop garden.

This bird type is only referenced in all the formats of Cam's book, Words In Our Beak Volume One, but in volume two (WIOB V2) information about this little character will be provided. WIOB V2 has been written and all the photos being included, but the book needs to be formatted. Because Cam and I are including this creature, the question came up on how he/she is referenced when more than one of them is being discussed.

Here's what the folks at Birds and Blooms have to say re the matter: "The word titmouse doesn’t have any connection to the rodent. Instead, the second syllable is based on the Old English word mase, which means 'small bird.' Technically, there’s no reason why mouse and mice should match titmouse and titmice. A purist would probably say titmouses is correct. On the other hand, a couple of major dictionaries (and bird guides) give titmice as plural. So you can probably get away with either!"

My visiting tufted titmouse has always come here alone so the need to refer to him/her in plural form has not come up, but if all his/her type looks like the one who visits my place, I'd love to see more, which you can probably understand upon seeing the following images, all taken in my garden during the times he/she stopped by for a bite to eat. 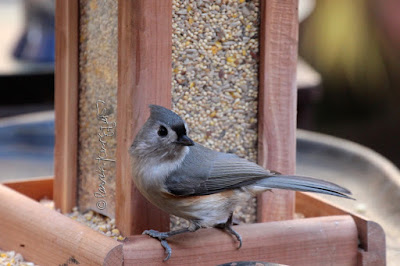 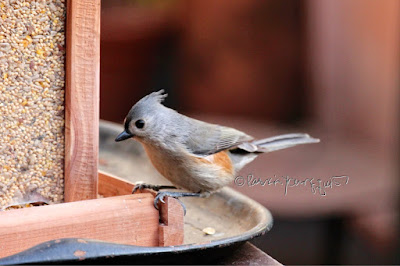 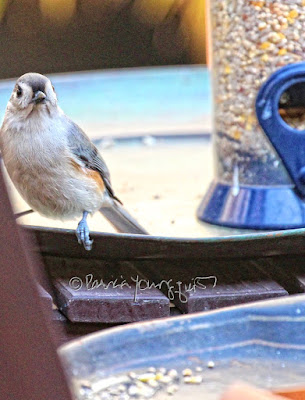 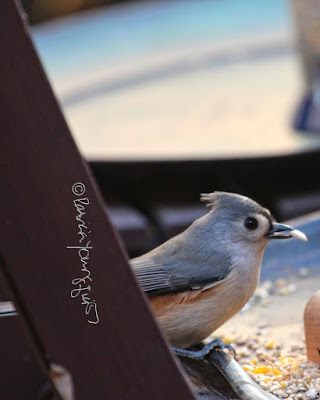 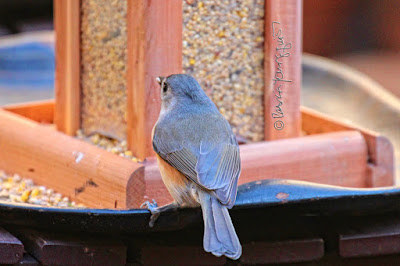 In any event, Cam and will refer to the Baeolophus bicolor in plural form as titmouses.

A web-page for Bird Note says this re plurality and the Baeolophus bicolor: The name titmouse "descends from two ancient Anglo-Saxon root words — 'tit,' from a word meaning something small. And 'mouse,' from a word applied to any small bird, as well as that little rodent."

Another web-page which is associated with Natural Lands, states that "It seems that the mouse comes from an Old English word mase, meaning small bird.  It has nothing to do with little rodents.  From a purely etymological sense, calling several birds Titmice is like using Mongeese as the plural of Mongoose." The writer of this particular page concludes, either way, when referring to this bird in the plural, they are "charming birds."

And I totally agree! But the titmouses/titmice controversy does bring another word usage controversy to my mind which is the one known as "You Say 'Tomato', I say 'Tomato'..." and is featured in the You Tube video below.

So rather you say titmice, and Cam and I say titmouses, LET's NOT CALL THE WHOLE THING OFF!