Throwback Thursday: "When this old world starts getting me down," I can rarely go "up on the roof" (and now Juan can't either)! 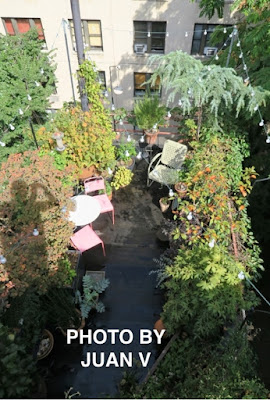 The circle affixed to the aforementioned image is indicating Juan's shadow as he photographs my garden from the rooftop of the building where I live. 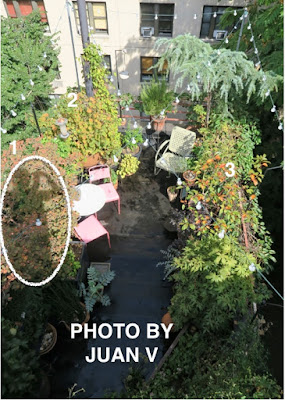 Juan has been taking aerial views of my garden on a bi-monthly basis (during the growing season) since the year 2010. In order to do this, he has to climb up a ladder that is my hallway and thrust open a latch which leads to the building's rooftop.

The latch is extremely heavy — at least for me —making it hard to open; therefore, I have only been up to the building's rooftop on a handful of occasions in all the years that I have lived here. Two of those times were this past May as well as this past July, and the foliage was quite different than it was when Juan came here the other day.

The set of pictures directly below were taken by me on May first of this year. I've used the same numbering system (number one for my Smoke Bush, number two for my Contorted Hazelnut and number three for my crabapple tree) on these photographs that I did in the image directly above, in order to make it easy to compare the foliage's traits during a given season.

The small white arrow that is affixed to the second and third images is indicated my Fagus sylvatica (Beech Tree), which is obstructing the view of my crabapple tree (number three).

The circle affixed to pictures three and four is highlighting a Mourning dove catching some rays. 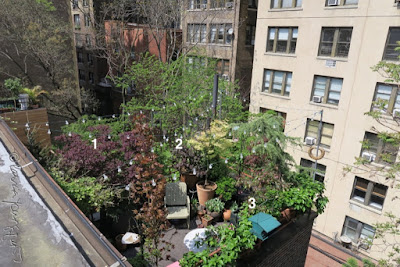 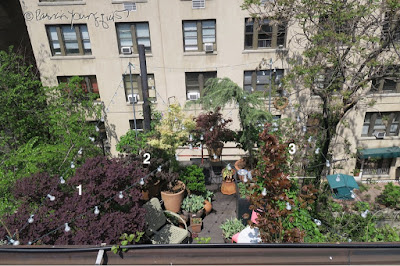 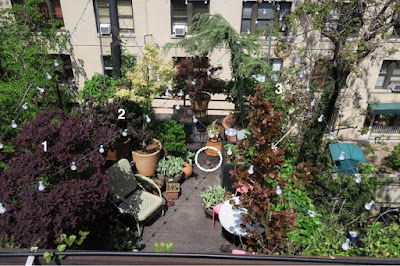 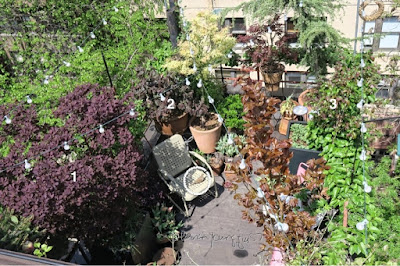 The following photograph, taken on that same day, is intended to illustrate the shape of my garden as well as its relationship to the building's rooftop. 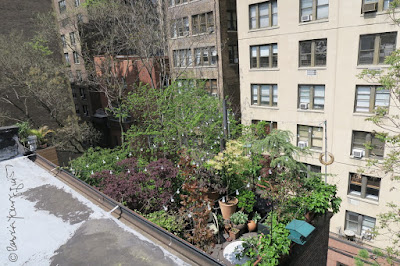 Then on July thirty-first, with the help of  someone working in my apartment, I ventured up to the building's rooftop and took the following series of photographs, where once again, used the same numbering system (number one for my Smoke Bush, number two for my Contorted Hazelnut and number three for my crabapple tree, as well as a white arrow to indicate my Fagus sylvatica (Beech Tree); which had been moved from the southeast corner of my garden to the southwest corner. 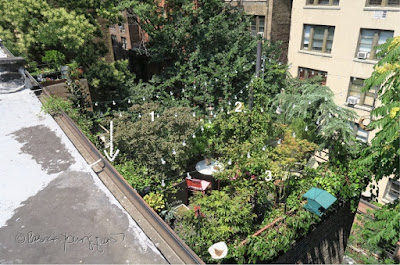 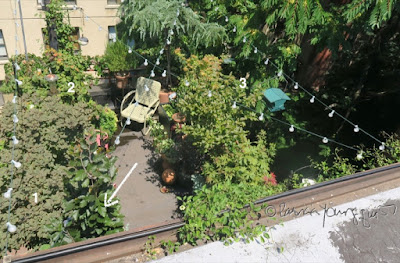 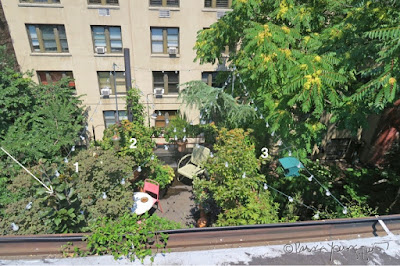 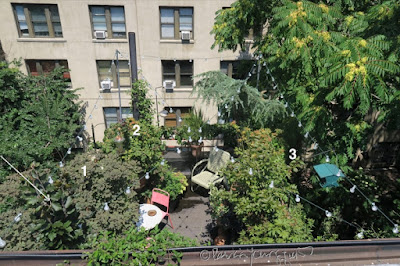 I have not been back up to the building's rooftop since I took the four images that are directly above, and, as I said when I was there on that day, marked my fifth or sixth time being on the rooftop during the entire time I've lived here (which has been since the early 1990's.)

As I said earlier access to the roof is quite difficult, as you might surmise from the next image. 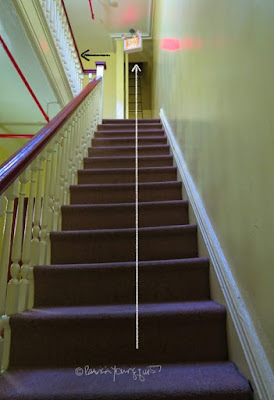 This picture features the last ten of the seventy stairs which lead to my apartment. The black arrow indicates where my entrance is located as it is off camera in this posting. The white arrow indicates the ladder one has to climb up if he/she wants to go on the building's roof. Once a person is on the top rung of the ladder, a very heavy latch must be opened in order to go outside. Therefore, it has been rare that I have taken advantage of going on the building's rooftop.

However, as I mentioned earlier, Juan has been taking aerial views of my garden on a bi-monthly basis (during the growing season) since the year 2010, and he has dealt with the precarious ladder as well as the latch on quite a number of occasions.

But it looks like this past Thursday is the last day for Juan V's aerial shots.
He announced to me yesterday that he's a bit afraid of falling while up on the roof and I don't blame him. I would feel horrible if he injured himself while taking pictures of my garden.

Therefore, the first two images seen atop this entry as well as the following two sets of pictures will be the final ones. 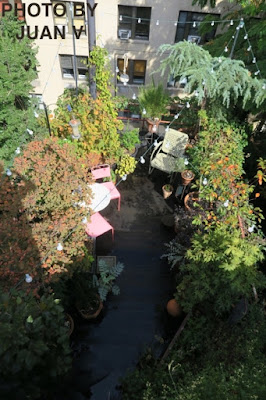 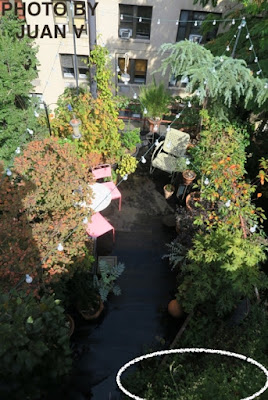 The first set directly above, features a reason Juan V went up on the roof, other than to take pictures of my garden. It appeared that my Sweet Autumn Clematis was trying to grab onto my string lights, and we feared this vine (indicated by the circle in the second image) could pull them down; so he went up there to trim it. 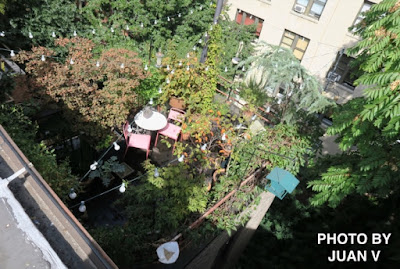 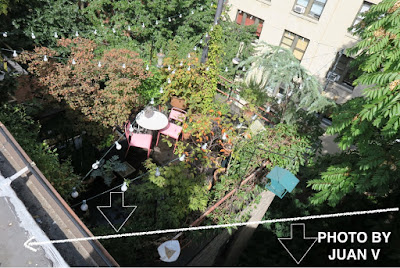 As you can see from the set of photos directly above, the roof isn't smooth and it would be easy to trip by the gutter (which is indicated by the long arrow affixed to this image. The shorter arrow (right shows the long drop down to my garden, while the other short arrow (left) shows the even longer drop down arrow to the ground.

I most grateful that nothing has happened to Juan V or me when we've been up on the roof, for I don't think our experience is what The Drifters had in mine when they sang, Up On The Roof, as they are doing in the You Tube video posted directly below, I've also posted the lyrics in the event you want to sing along.

As for me dear reader, when this whole world starts getting me down, if I want to go up on the roof, it won't be my building's.

On the roof, it's peaceful as can be
And there, the world below can't bother me
Let me tell you now

At night, the stars put on a show for free
And, darling, you can share it all with me
I keep-a tellin' you