Here's my Tuesday's Truths entry for Week 59: I finally went to the beach! 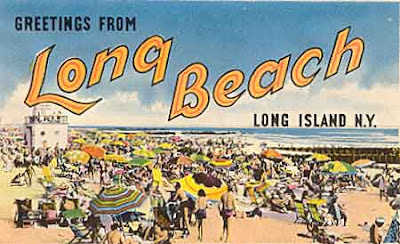 Hello, and welcome to Tuesday's Truths for week fifty-nine: I finally went to the beach! If you follow my entries here on Blogger, dear reader, then you may recall that I have been trying to go to the beach for the year 2017 ever since May. Therefore, I'm so thankful that I finally had the opportunity to this, even though, because of traffic in getting there, we could only be on the beach four hours.

The beach I was able to visit was Long Beach which is on Long Island in New York. I've been to this beach on countless occasions since I moved to NYC in the 1980's, and several of my trips there have been with my sister, who unfortunately has not been able to visit me this year (as of this posting).

In any event, in spite of the fact thatI have been to Long Beach on so many occasions, I have never visited there in the month of October. It was such a wonderful experience to be there on a Saturday afternoon at this time of year.

And because it's "officially" the end of beach season (meaning there are no lifeguards), the beach was not peppered with as many umbrellas and beach chairs, as depicted in the image atop this entry, which is from a web-page.

However, a fair amount of people, as well as seagulls, were there enjoying an October day at the beach.

Some were fishing or taking a quiet stroll, as evidenced below. 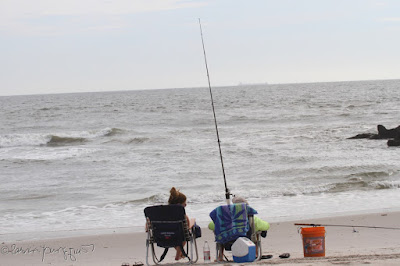 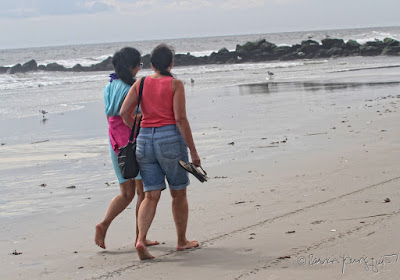 Another person was riding the waves, as seen in the next set of images. (Hopefully the wave-rider did not injure seagulls in the process as he did this). 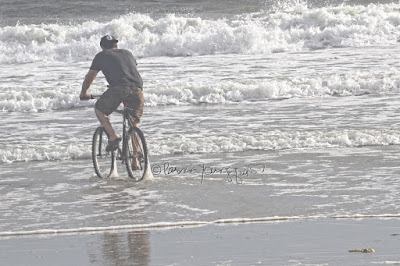 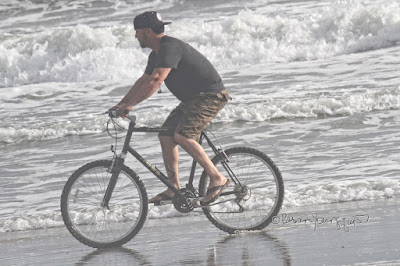 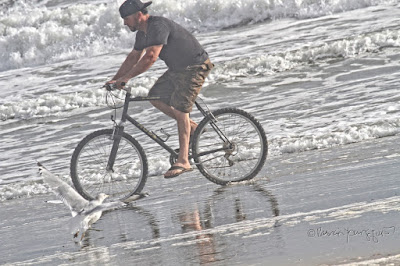 And many (folks as well as seagulls) took advantage of the fact that there were  no lifeguards by blatantly ignoring the signs pertaining to the jetties (seen in the following photos). 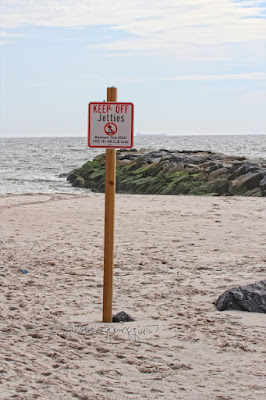 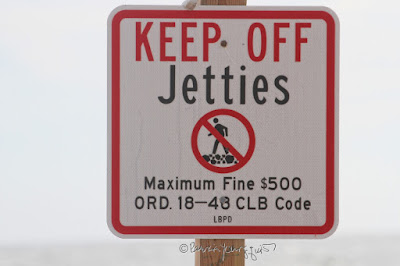 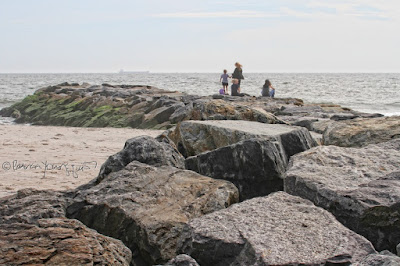 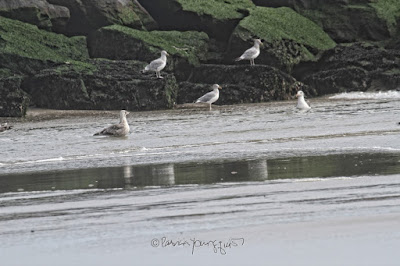 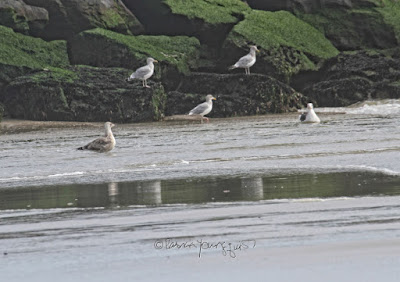 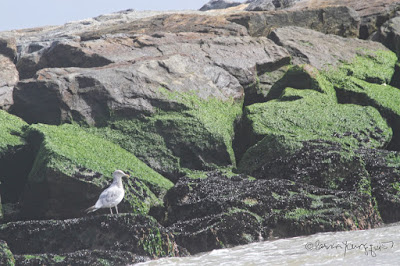 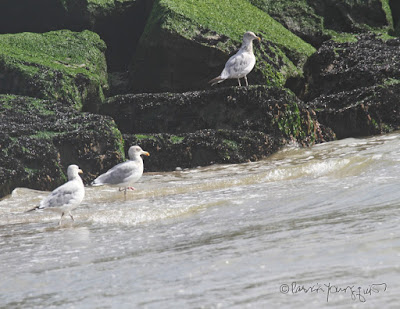 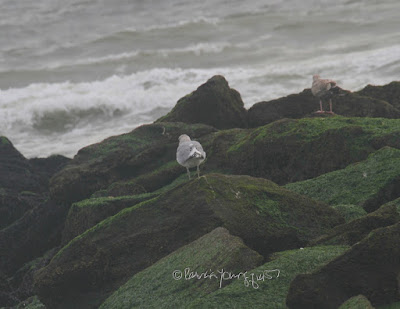 And speaking of the jetties, evidently, all during this past summer, The Army Corps of Engineers has been working on a project. I learned via a web-page, that "the corps of engineers is rebuilding the jetty off of Arizona Boulevard in West Long Beach (because) it was eroded by Superstorm Sandy nearly five years ago, and now the cranes and bulldozers are busy replacing worn out and fractured rocks on the jetty with new ones."

According to the aforementioned web-page, this project is "meant to protect against future big storms, but beach lovers in Long Beach said the solution to rebuilding a jetty literally stinks... it comes with some nasty summertime side effects... The heavy construction has caused beach closures just as the summer season arrived... The U.S. Army Corp of Engineers acknowledged that it’s received complaints, but the federal agency said it happens every time they dig up crumbling rocks from the old jetty because they also dig up tens of thousands of mussels which give off a very strong smell, especially in the summer heat... And that’s the way it will be for a while, since the U.S. Army Corps of Engineers said the construction will last until next summer... It’s all part of a $100-millionn federal project to repair Superstorm Sandy..."

I saw some of the "replacement" rocks for the jetty as well as "road signs on the beach" (featured in the photographs below showing how it appears from the vantage point of looking away from the beach towards the boardwalk); 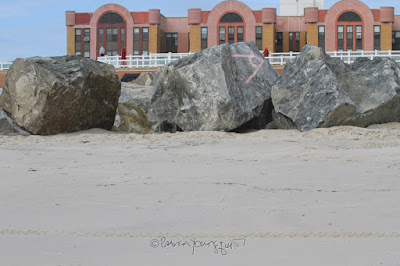 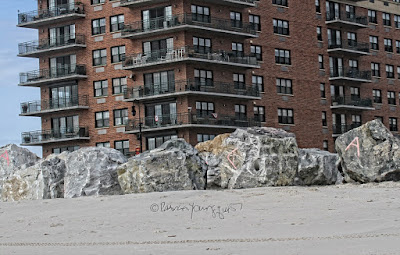 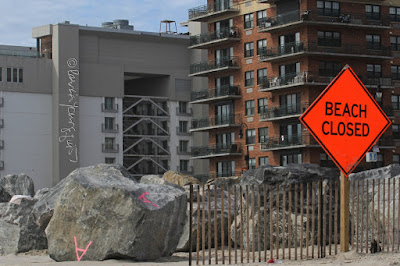 as well as how it looks from the vantage point of looking towards the ocean; 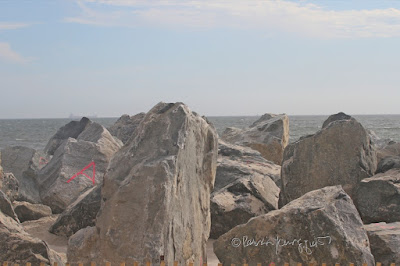 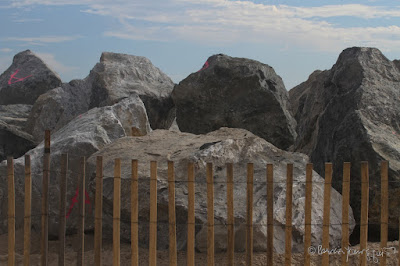 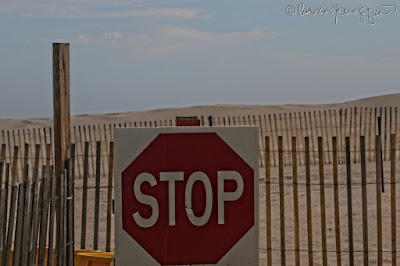 and it made me less sorry that I had not been able to get to Long Beach during the 2017 summer season.

But it seems the construction re the jetties, did not totally discourage beach goers, or certain sole proprietors. A funky place on the boardwalk known as Rip Tide, reminded beach bums, of the day's beach-related conditions,

and also that there are options for going to a beach in the NYC area (as evidenced by their "boardwalk-street sign" featured in the following image). 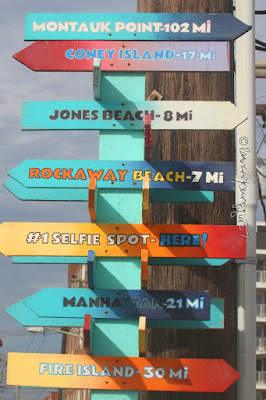 Moreover, the construction did not deter a beach-artist from creating a drawing of a mermaid in the sand as seen in the next picture. 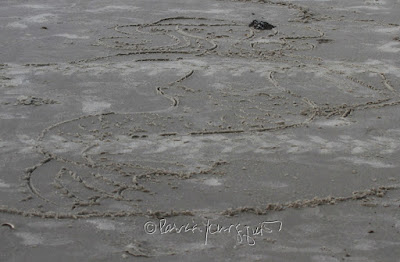 Upon seeing this art work featuring a mermaid, I was reminded of one of the times that she went to Long Beach with me, and posed a a mermaid alongside Rip Tide. Check out her photo-op below. 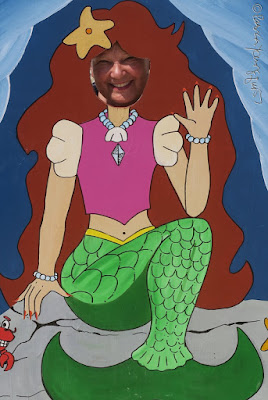 My Saturday at the beach was lovely, it could've been even more so had my sister been with us!
Posted by The Last Leaf Gardener