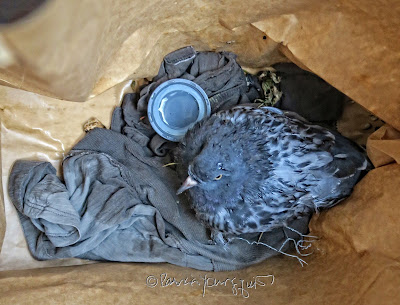 The photograph atop this posting is a copy of one that I included here on Blogger in my entry that I published this past Friday, when I stated the following: "my duties are dedicated to helping an injured pigeon that I discovered in my urban garden last night."

I also stated this: "Hopefully, I'll be able to get him to The WBF, (Wild Bird Fund), and, hopefully they will be able to free him from the wire contraption, as well as treat any injuries which might have resulted."

The following picture shows how the pigeon looked when I saw him/her in my rooftop garden (before I put him/her in a container to transport him/her to The WBF. 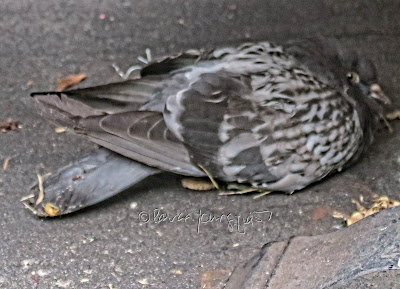 Thankfully I was able to take the pigeon to The WBF on that same day.

I went to see how he/she was doing the following day but nobody knew anything about "my" bird.
They are very busy at The WBF, so I emailed them (which is there preferred correspondence) and I just received the following news re his/her status.

"Hi Patricia,
The bird you brought in to us was in rough shape, and I am sorry to tell you that he did not make it. On arrival, he was in critical condition and appeared to be suffering from some kind of internal damage. We gave emergency fluids right away to try and stabilize his condition, but despite our best efforts he continued to decline, and passed away shortly after our initial examination. We suspect that he had major organ damage, either from trauma or from disease. I know this is not the outcome you were hoping for, but please know that by taking him in and bringing him in to us, you ensured that he was in a safe and comfortable environment, rather than at the mercy of the elements."

I am very saddened by this news. It just breaks my heart.
Posted by The Last Leaf Gardener