Today I am thinking about the gosling triplets (pictured above), which I encountered in Central Park this past June, because I am also one of three (sisters), although we are not triplets.

A photograph of us with our grandfather that was taken when we were very young can be seen in the next picture. 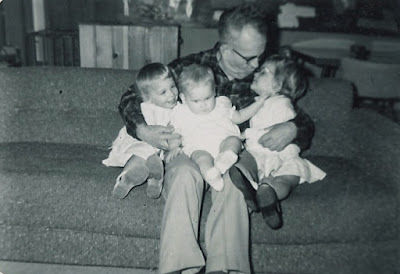 Being one of three, has caused me to challenge the adage,"bad things happen in threes," which I did in a blog post that was published in 2011. This entry deals with the placement of flora (in threes) within my rooftop garden.

In any event, I'm thinking of the "bad things happen in threes," adage on this day of July 13th, as it is my youngest sister's birthday. She is the one in the middle in the aforementioned photo (I'm the one to her left — or seen to her right in this image).

She can also be seen sitting in the middle directly below.

And in this picture, as with the first one featured of us, I'm the one to her left — or seen to her right in this image. It is a photo you might recognize as it is included in at least one of my Blogger entries where I discuss Thanksgiving.

Be that as it may, I think most of the time, my parents did not believe bad things happened in threes when it came to us, although there were times that they did.

However, like the Canadian Geese, seen in the set of images below with their goslings...


... I know my grandfather never saw us as "bad things happening in threes."

In fact, he had three living children (his fourth died at the age of three days) himself. His three children  can be seen when they were youngsters with their cousin (who is second from the left) in the following photo. 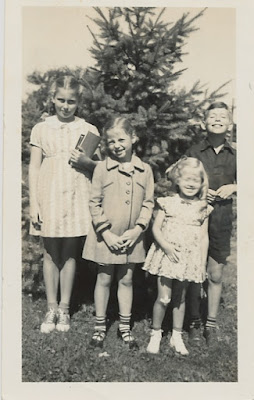 And they can be seen as grownups directly below. 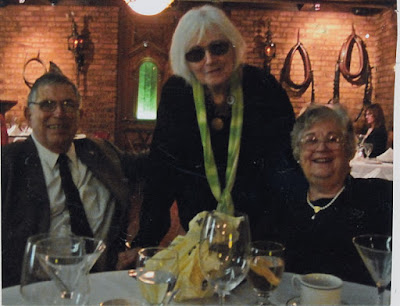 There you have it dear reader, my reprised challenge of the adage, "bad things happen in threes," inspired by the fact that today is my sister's birthday, for had she not come along, I would not be one of three!
Posted by The Last Leaf Gardener