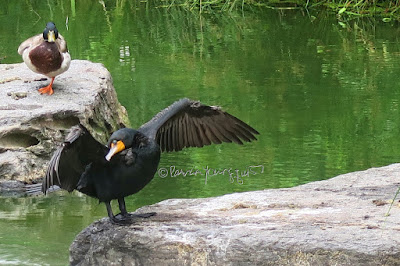 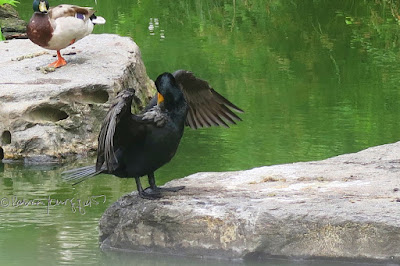 If you follow me on Blogger, then you know that for a number of weeks now, (ever since the date of June 19th 2016), I've published a series every Tuesday which is called Tuesday's Truths. This is week forty-six of my Tuesday's Truths postings.

In this entry, I'm sharing some interesting truths re the bird type known as a Double-crested Cormorant, the bird variety seen on the right side of both images atop this entry. I took the pictures this past Friday when I walked through Central Park with someone who was visiting NYC from the west coast.

It was the first time that I've ever encountered a cormorant, and, I found the antics of this bird type to be fascinating. According to Cornell's web-page, I'm not alone in my fascination. Here's what they have to say re the Double-crested Cormorant:

"The gangly Double-crested Cormorant is a prehistoric-looking, matte-black fishing bird with yellow-orange facial skin. Though they look like a combination of a goose and a loon, they are relatives of frigatebirds and boobies and are a common sight around fresh and salt water across North America—perhaps attracting the most attention when they stand on docks, rocky islands, and channel markers, their wings spread out to dry."

As you can see in the pictures atop this entry, where a male duck is engrossed in his bird watching (staring at the cormorant), Cornell proclamation re cormorants is true: "this bird variety attracts the most attention when they stand on docks, rocky islands, and channel markers, their wings spread out to dry."

The cormorant's antics in the situation depicted here truly gave the duck a reason to be pre-occcupied with his business of preening, evidenced in the next picture. 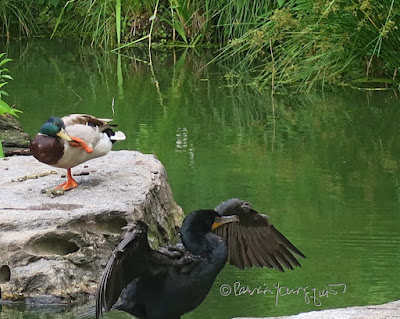 The female duck was more discreet in her observing the cormorant. This is evidenced in the next picture where she is doing some bird watching of the cormorant (lower right) while the male duck returned to business as usual (preening). 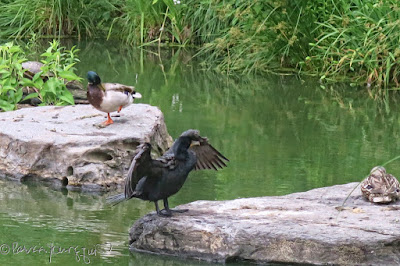 However, the male duck's need to preen seemed to be surpassed by his need to gaze (rather his desire to stare) at this cormorant, for he stopped preening to continue his observance, while the female duck did the same (albeit in a more coy manner), as seen in the following pictures. 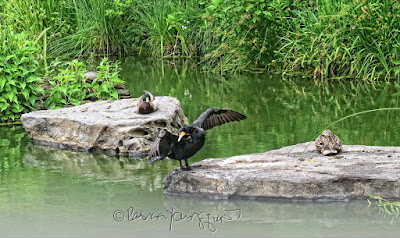 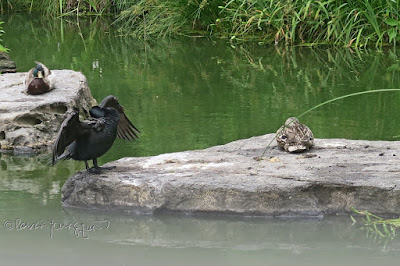 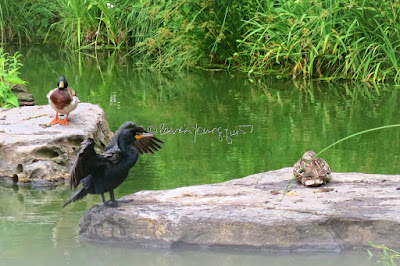