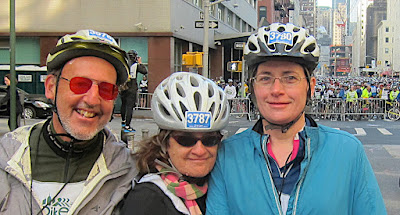 Today is Cinco de Mayo. Re this holiday, USA Today states "For many Americans, Cinco de Mayo is a day for enjoying Mexican food, culture — and maybe some margaritas. Its historical origin is quite different: Cinco de Mayo commemorates the Mexican army's victory over French forces on May 5, 1862, at the Battle of Puebla. Contrary to popular belief, Cinco de Mayo is not Mexico's independence day, which is Sept. 16."

In 2013, the holiday coincided with The Five Boro Bike Tour (TFBBT), which I participated in for the fourth time! The image atop this entry features me with my bike captain, ZW, and another cyclist as we posed at the start-line before the event took place. As you can see, scores (thousands) of cyclists are behind us, many of them wore sombreros over their helmet in honor of Cinco de Mayo.

And, a number of participants, including yours truly, wore a "solidarity" badge, as a way of paying homage to those who were severely injured and/or lost their lives during the bombing at The Boston Marathon, 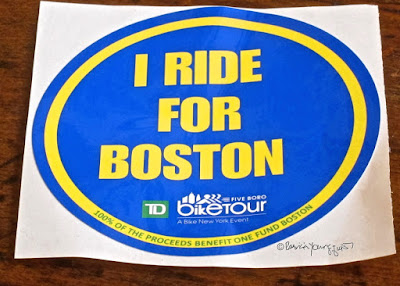 This tragic event had occurred a few weeks prior to the time of the 2013 of the TFBBT. Therefore, security was especially tight! But all that were involved, made an effort to enjoy the opportunity to participate in this awesome event; topping it off a margarita to toast Cinco de Mayo! 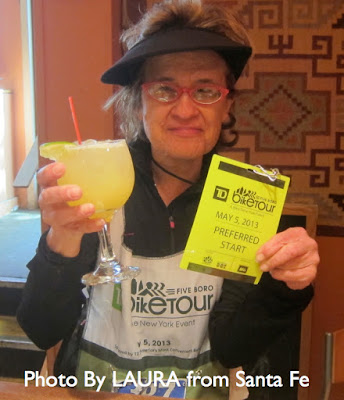 This coming Sunday, another TFBBT, will take place but I won't participate this year. However I will always be grateful for all the times I was able to do so! AND, meanwhile, Happy Cinco de Mayo to you and yours, dear reader!
Posted by The Last Leaf Gardener