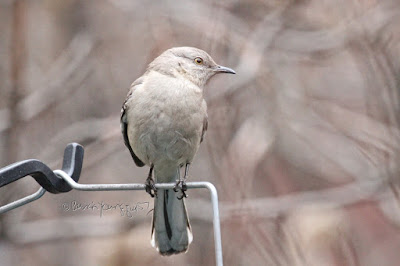 Every time I see a Northern mockingbird in my rooftop garden (which is what is featured in the picture atop this entry), I think of Harper Lee, for her writing the book, To Kill A Mockingbird.

Ms. Lee was born on this day of April 28th in 1926 and died on February the 19th in 2016. In honor of Lee's birthday, I'm featuring a cool fact regarding this bird type, who as you can see appears to have eyes on the side of his head. This a trait other bird types also have and it is described in a page from Quora.

According to Sam Greydanus, a contributor to the aforementioned page (who addressed a question re the fact that most birds have eyes on the sides of their heads, not on the front), "Birds, insects, and many mammals that have eyes on the sides of their heads actually depend heavily on motion parallax, which is one of these types of depth perception. Motion parallax is when you move your head from side to side and objects close to you appear to move more than objects in the distance."

I have also read that "most birds that have eyes on the side of the head have only one fovea. Fast flying biers have a temporal fovia. This temporal fovia allows them to see light from in front of them through each eye. This in turn helps with depth perception. Birds without this have to turn their head to get the same light in both eyes."

And because the mockingbird pictured above and below, is turning his head, I would assume he does not have a temporal fovia, however I am waiting to hear back from a few naturalists regarding my assumption.