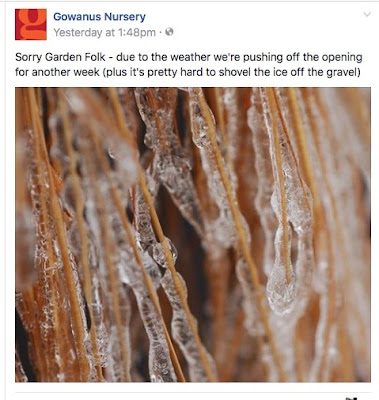 The picture atop this blog entry is a screenshot of an image that was included in my newsfeed for my Facebook Page for The Last Leaf Gardener.

It came from the FB Page for Gowanus Nursery in Brooklyn; a place where I have gotten a number of the trees (as well as other flora varieties) that grow in my rooftop garden, which is still in a state of winter-to-spring-limbo, as evidenced by the following image. 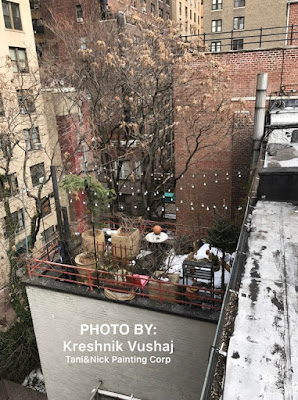 This photograph was taken by Kreshnik Vushaj. It is a picture which I included in yesterday's entry here on Blogger.

Like the folks at Gowanus nursery, who had scheduled a re-opening (after their winter hiatus) for March 18th 2017; I've been anticipating de-winterizing my rooftop garden; and I had planned to do so with Juan V, a few days before Gowanus's intended date.

However STELLA (the "bombogenesis" nor'easter), decided to visit our area causing all of us to rethink our gardening plans! Juan V and I have rescheduled the date to de-winterize, and Gowanus has rescheduled their season opener, which I saw in my newsfeed; and have posted below. 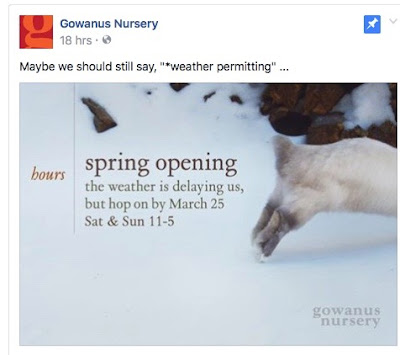 As you can see, they now hope to open one week later than planed. Juan V and I have also opted to reschedule one week later than planed! We hope to de-winterize a week from today, but from the looks of my garden, as seen in Kreshnik Vushaj's photo, I'm not sure if the weather will be in line with our plans. And last I heard, we are ruled by weather, it is not ruled by us!

So, while I'm hunkered down as far as gardening is concerned, let me take the opportunity to show you some aspects of my garden. I am thankful to Kreshnik Vushaj for my being able to do this, for he surprised me by emailing me a few more views of my wonderful garden.

Here are the copies of Kreshnik Vushaj's photographs, which I've marked up with arrows and numbers in order to tell you what's what. 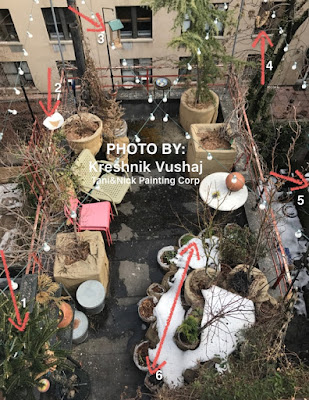 The arrow marked with numeral one is referring to my Canadian Palm Tree, seen in a solo photo-op below. 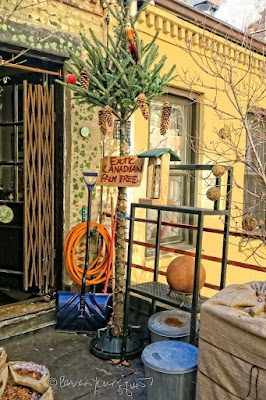 The picture of my Canadian Palm Tree is an image I've included in a number of entries here on Blogger, but thanks to Vusha, you can now have a sense of where it stands in relation to the flora and objects which I have here. But getting back to the aforementioned image taken by Kreshnik Vushaj, the arrow indicated with the numeral two, is my bird bath. I have to really monitor the conditions of the water in that bath, for as you can surmise, frozen temps might crack the bird bath; as it is a ceramic piece.

Numbers three-five indicate where I have some of my bird-feeders, while number six indicates the location of much of my flora, huddled together near the building's wall, where they are somewhat protected from the high winds. The next  picture by Kreshnik Vushaj, 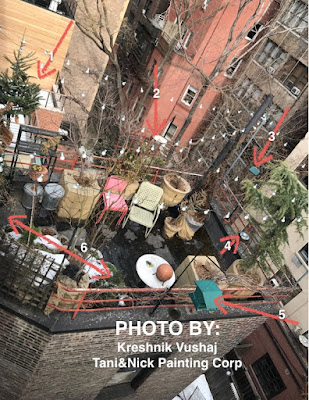 shows my place from a different angle. Once again, numeral one indicates the Canadian Palm Tree, the number two indicates my bird bath, and the number three indicates one of my bird feeders (the one which accommodates whole peanuts). However in this image, the number four indicates a small bowl holding water for my visiting birds. The water in both the bird bath and this bowl can easily freeze over in these conditions, so I have to monitor it carefully, which I do, as water is very important to a bird's survival. The number five in this image, as well as in Vushaj's other image, indicates my bird feeder that I call a Monopoly Feeder. I gave it that name because it looks like one of the trinkets from the infamous board game. And, again, as it did in Vushaj's previous image, the number six indicates the location of much of my flora, huddled together near the building's wall. 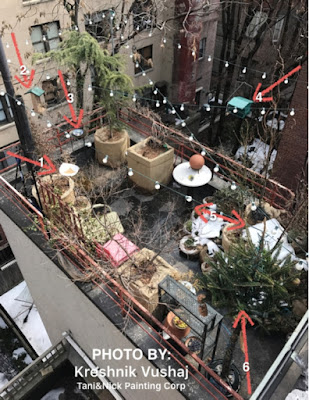 the ceramic bird bath is noted by the number one; and one of my whole peanut feeders is referenced by the number two. Number three is referencing the birds' water bowl; number four points to the Monopoly feeder; number five indicates my huddled plants; and, the number six is  pointing at my Canadian Palm Tree.

And with that, I'll leave you with an unmarked photograph by Kreshnik Vusha, 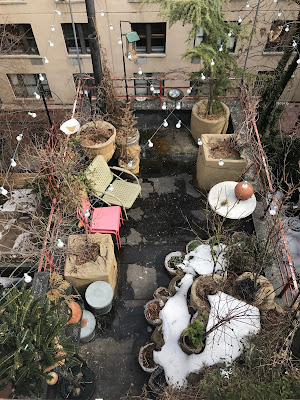 and a recommendation that should you ever need any painting done or interior construction contract related services, contact Kreshnik Vushaj's company Tani & Nick Painting Corp.

I live in a rental apartment, so I have not personally seen Kreshnik Vushaj's work close-up, but I've seen it from the distance of my rooftop to the building he has been working on. Moreover, if Kreshnik Vushaj can take such detailed photos, as evidenced in his pictures here, I imagine his attention to detail in assignments is unsurpassed.

Upon reflection, had Juan V and I  been able to do our de-winterizing when we had planned, I might not have had the opportunity to ask Kreshnik Vushaj to take some images for me. I did on a chance encounter, knowing he has access to interesting vantage points of my garden; as evidenced here.

Therefore I cannot be too disappointed re postponements for as Robert Burns knew, “The best laid schemes o' mice an' men / Gang aft a-gley.”
Posted by The Last Leaf Gardener