Tuesday's Truths, The Thirty-Fourth Week: Allium schoenoprasum (Chives) may not be the first harbinger of spring! 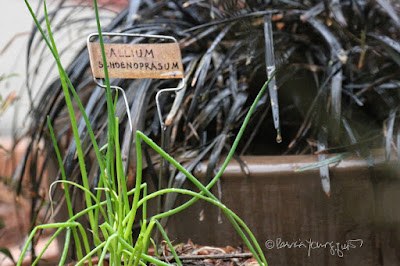 Today, March, the twenty-eighth, marks the thirty-fourth anniversary of my Tuesday's Truths series here on Blogger. It is also eight days since the official onset of spring.

And FYI, the herb known as Allium schoenoprasum (Chives), pictured above, where it is making a come back from winter in my rooftop garden, is considered by many,  to be the first harbinger of spring. I wrote about this in 2010 here on Blogger, where I included a picture of a greeting card that I created which was inspired by this herb (seen below), 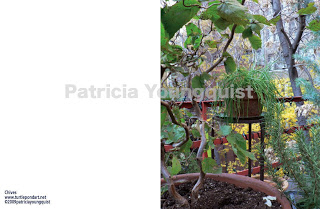 and I stated, "Seemingly, nothing better announces the end of winter than the sight of sprightly chives. Their bright green grass–like appearance is the very first harbinger of the long awaited season.
Chives become the guest of honor at Rites of Spring soirées. Their finely cut leaves enhance cheese spreads being served on a Tom Cat baguette with a goblet of Pinot Gris. When swirled into a Vermont cheddar cheese omelet, they add pizzazz to a brunch — especially if there are flutes of champagne to drink with it.

"Additionally, chives are often added to Vichyssoise, another soirée favorite. The thin wispy leaves of chives can be used to make a flavored ribbon when tying bunches of raw veggies such as carrots. If they are not being grown for harvesting, beautiful and long–lasting lilac–colored flowers develop at their spears! These make elegant centerpieces and when tied into a bouquet with strands of chives, they make a unique hostess gift."

I now confess that, even though it's been over seven years since I published the aforementioned blog post, I'm no longer sure if chives are the FIRST harbinger of spring. This is because I came across a mini essay THE ARRIVAL OF SPRING, by E.B. White (posted below), 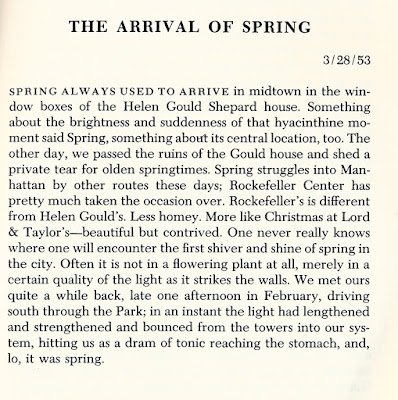 As you can see, White's essay was published on this day, sixty-four years ago today. I do appreciate how White saw the onset of spring with the strengthening and lengthening of light!

But, rather it is chives coming back from their long winter's nap, or the strengthening and lengthening of light, it's nice to know that the spring season for this year of 2017, may be about to begin here in NYC!
Posted by The Last Leaf Gardener