Re National Chocolate Covered Raisin Day... (It's NOT for the birds!) 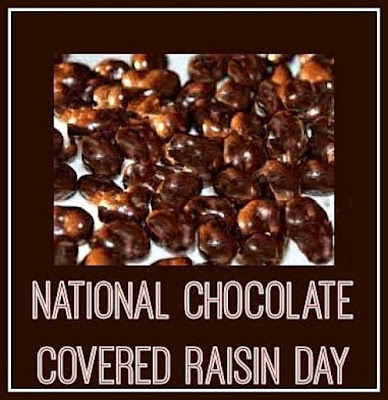 Yesterday, if your troubles seemed so far away, it may have been because you were enjoying the holiday known as National Chocolate Covered Raisin Day, which is a holiday I wrote about in an entry here on Blogger a number of years ago.

According to a web-page (which Google Images referred me to for the image which is atop this entry), "Raisins coated in a shell of either milk chocolate or dark chocolate have their own special day of honor each March 24th on National Chocolate Covered Raisin Day."

And another web-page re this holiday explains that "in some countries, chocolate covered raisins are known as Raisinets. (and they also claim that 'more than 1 million Raisinets are produced per hour'). Raisinets were the earliest and one of the most popular brands of the product.  Currently made by Nestle, they are the third largest selling candy in United States history.  The Blumenthal Chocolate Company introduced the Raisinets to the United States in 1927, and then in 1984, the brand was acquired by Nestle.  There are also a large number of other brands of chocolate covered raisins on the market."

Moreover, there is a web-page which describes ways on how to celebrate chocolate covered raisin day! They state that "Chocolate Covered Raisins by the handful is just the beginning of the best ways to celebrate this delicious holiday! Those who truly love Chocolate Covered Raisins reach their innovation into the kitchen, and find new ways to enjoy them. For the truly dedicated, there’s nothing like sprinkling a handful into chocolate cake batter before cooking, and then adorning the top of the cake with them to add a sweet bite to a rich chocolatey cake."

And they announce that "there are those who take the most amazing cookie the world has known (Or the devils chocolate chip to those who aren’t fans) the Oatmeal Raisin cookie, and use Chocolate Covered Raisins to turn this healthy cookie favorite into the pinnacle of decadence..."

The holiday may sound to some as a good excuse to indulge; but it is not an occasion that should be celebrated by sharing one's chocolate-covered raisins with the birds. For while it's true that a number of wild birds (including Northern mockingbirds, blackbirds, song thrushes and American robins), do enjoy raisins; as evidenced by the Northern mockingbird, 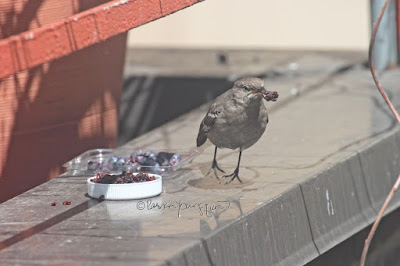 who is eating plain raisins while atop the ledge which surrounds my rooftop garden, they should not be fed the chocolate-covered variety. This is because (according to a number of sources) it contains a compound called theobromine. Theobromine is toxic to dogs and cats as well, but birds, again due to their smaller size and more rapid metabolism, may be even more susceptible to its toxic effects.

Therefore, if you celebrated yesterday's holiday by nibbling on chocolate-covered raisins, I hope you did not share them with any birds, for as the song goes their "... will be here to stay."

So, you get the idea, dear reader, share your non-chocolate-covered raisins with your feathered friends. However if you do this in the spring and summer make sure you soak the raisins in water over night before serving them. And I guarantee  that you will get much pleasure in watching these creature eat them!

Meanwhile, until you get a chance to offer birds the proper raisins, I hope you enjoy the following photos of a Northern mockingbird induldging in this snack as he sits on a bouncer-style chair in my urban garden. 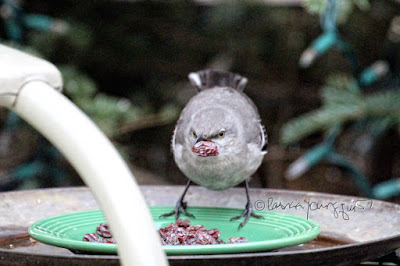 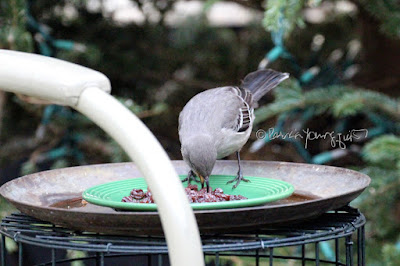 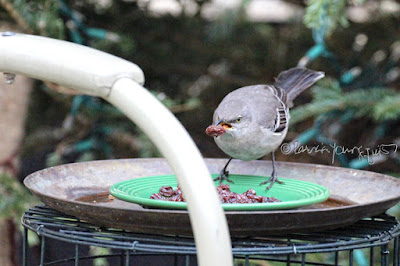 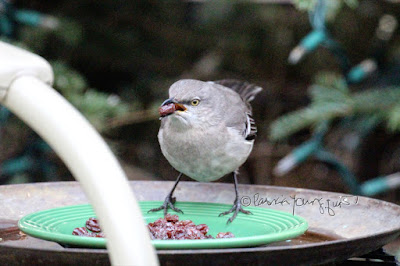 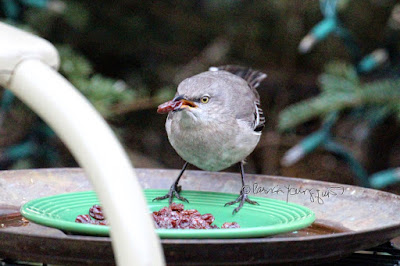 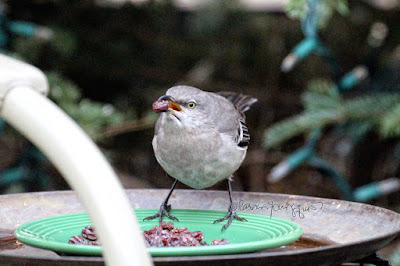