Today's "The day the music died." 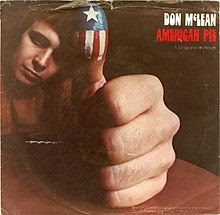 The photo atop this blog entry is from Wiki's page for American Pie (song) and they describe it as a "picture sleeve for U.S. vinyl single. Artwork is also used as the front cover for the album of the same name and many other international releases of the single."

Here's what the aforementioned page has to say re the song and the man who wrote it (Don McLean):

"'American Pie' is a song by American folk rock singer and songwriter Don McLean. Recorded and released on the American Pie album in 1971, the single was a number-one US hit for four weeks in 1972. In the UK, the single reached No. 2 on its original 1972 release and a reissue in 1991 reached No. 12. The song was listed as the No. 5 song on the RIAA project Songs of the Century."

I am thinking of the song American Pie today because today (according to Holiday Insights) is known as The Day the Music Died Day (and) "it commemorates the untimely death of singers Buddy Holly, Richie Valens and the Big Bopper" who died in a plane crash on February 3, 1959.

That tragic event was referenced in McLean's song, with the lyric lines, "February made me shiver/with every paper I'd deliver...."

The Wiki page claims that "except to acknowledge that he first learned about Buddy Holly's death on February 3, 1959—McLean was age 13—when he was folding newspapers for his paper route on the morning of February 4, 1959... (McLean) has generally avoided responding to direct questions about the song lyrics; he has said, 'They're beyond analysis. They're poetry."' This Wiki Page provides many facts interesting re the song and McLean and I encourage you to look refer to it.

I also encourage you to listen to the song American Pie on this day that the music died and I've posted it below for your convenience.

Moreover, re the tragic 1959 plane crash, Dave Lifton an informative article re the tragic event in an article where he included the following photograph. 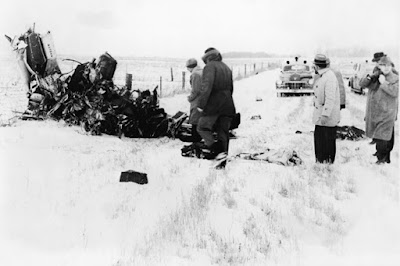 Here is a snippet from Lifton's piece: "Rock ‘n’ roll was still in its infancy when it suffered its first tragedy. On Feb. 3, 1959, three of its biggest stars — Buddy Holly, Ritchie Valens and J.P. Richardson, known as the Big Bopper — were killed in a plane crash near Clear Lake, Iowa.

"The three acts, along with Dion and the Belmonts, were on a package tour called the Winter Dance Party, which was to play 24 Midwestern cities in as many days. But the bus’ heating system was ill-equipped and broke down a few days later, which caused some musicians to catch the flu and Holly’s drummer Carl Bunch to be hospitalized for frostbite. By the time they reached the Surf Ballroom in Clear Lake on Feb. 2, about a week and a half into the tour, Holly, after the show, decided to charter a plane from nearby Mason City to Fargo, N.D., just across the state line from their next gig in Moorhead, Minnesota...

"The plane, a Beechwood Bonanza, had room for only three passengers — Holly and his band — and the pilot, Roger Peterson. Holly’s bass player, future country legend Waylon Jennings, gave up his seat to Richardson, who was ill. According to Jennings’ autobiography, Holly teased his bass player by saying, 'Well, I hope your ol’ bus freezes up.' To which Jennings responded, 'Well, I hope your ol’ plane crashes.'

"There are conflicting stories as to how Valens wound up in the third seat. Tommy Allsup, Holly’s guitarist, claimed that he lost a coin flip to Valens in the dressing room. In 2010, Dion DiMucci, who had been silent about that night for 51 years, claimed that he, not Allsup, was slated for the third seat because he was one of the headliners. But after winning the coin toss, he balked at paying $36 for the flight — the amount his parents paid in monthly rent for the apartment where he grew up — and gave Valens the seat. Local DJ Bob Hale, who was the MC for the concert, agrees that it was between Allsup and Valens, but that he, not Allsup, flipped the coin.

"Regardless of the contradictions, around 12:55AM on Feb. 3, the plane carrying Holly, Richardson and Valens took off in a snowstorm with strong winds. But the plane traveled only a few miles before crashing, killing all four men instantly.

"The federal investigation ruled that even though the weather played a large role in the accident, the 21-year-old Peterson was too inexperienced to have been flying in such conditions. In addition, he had most likely misread the altitude indicator, which was different than the one on which he had trained, and inadvertently brought the plane down instead of up.

"At the time, Holly’s wife of six months, Maria Elena, was two weeks pregnant. The day after the crash, she suffered a miscarriage from the emotional trauma.

"In March 1980, a long-missing piece of the plane crash was discovered. Holly’s signature black-rimmed glasses had landed in a snow bank and were discovered in the spring of 1959, after the snow melted. They were brought to the Cerro Gordo County Sheriff’s office, sealed in a manila envelope and forgotten about for 21 years. Upon discovery, the glasses were returned to his widow and are currently on.... " Read More: The Story of Rock's First Tragedy: Buddy Holly, Ritchie Valens and the Big Bopper Killed in Plane Crash | http://ultimateclassicrock.com/buddy-holly-richie-valens-big-bopper-killed-in-plane-crash/?trackback=tsmclip

And with that I'll end this post re this day that the music died. But, I will be back later today to discuss another holiday happening on this day, which is up lifting, and is one that's for the birds, so stay tuned.
Posted by The Last Leaf Gardener